Former national U/23 champion Clinton Barrow marked his return to big time racing with a comfortable victory in the Mecer-NMMU Cycle Race that took place over 100km in a blustery Port Elizabeth on Sunday.

Barrow, who turns 21 on Saturday, crossed the line in 2:20:44 in the company of new team-mate Conrad Viljoen, 27, to sign off a day in which the Mecer-NMMU duo completely dominated the field.

Viljoen forced the winning move just after the halfway mark from a small group of three that also included Cape.

He attacked on the first of three back-to-back climbs that locals refer to as the Three Sisters and only Barrow, who raced professionally for DCM last year, was able to match him.

Together they built a lead that proved too much for the chasing peloton to overcome.

“After getting the gap, we put our heads down and worked together all the way to the finish. There was a cross tailwind for most of the way back and that definitely was to our advantage.”

Barrow said with sprinters like Pheiffer and Gouveris watching each other in the main pack, they knew the chase would eventually become disorganised and tilt the race in their favour.

The racing started early on after the start at the university with Mecer-NMMU’s Wesley Augustyn and Jared Salzwedel slipping away within the first five kilometres along Marine Drive.

“Our aim was to get a few riders up the road before the climb at Schoenies and fortunately this panned out,” said Barrow. “This put the pressure on the other teams to do the chasing.”

A leading group of seven – consisting of Augustyn, Salzwedel, Viljoen, Barrow, Mark Murray (Mecer-NMMU), Earl O’Reilly (Mecer-NMMU) and Cape – formed at the front following a flurry of attacks between Schoenies and Sardinia Bay.

They stayed at the head of affairs until Seaview at which point an extra injection of pace saw the group trimmed down to Viljoen, Barrow, Murray and Cape as they headed towards the day’s first big test at Maitlands.

Murray then faltered on the undulations between Maitlands and Three Sisters, leaving Viljoen, Barrow and Cape at the front.

Walmer’s Allison Hertel won the women’s race in 2:28:35 ahead of Masters and Ladies’ Ingrid Brown and team-mate Mandy Akom. 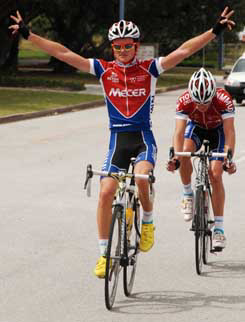 Former national U/23 champion Clinton Barrow marked his return to racing with victory in the Mecer-NMMU Cycle Race in a blustery Port Elizabeth on Sunday. Photo: Francois du Plessis