Three-time Commonwealth karate champion Morgan Moss and national hockey player Pietie Coetzee were named Sportsman and Sportswoman of the Year at the University of Johannesburg’s annual Sports Awards this past weekend.

“It’s a massive privilege,” said Coetzee, who won for a record fourth time. “It’s always nice to get recognition because playing an amateur sport you very seldom do.”

Coetzee, who was also a finalist for Sportswoman of the Year at the recent South African Sports Awards, said it was difficult to accept acknowledgement on an individual basis. “I play a team sport and my success is very reliant on what the team does.”

The two-time Olympian, who is currently studying towards her second degree at the institution, also received an honorary award for breaking the world record for the most international goals scored – 225 in 227 tests.

According to the university’s acting vice-chancellor Professor Henk Kriek, the 33-year-old emergency medical care student’s feat was made even more remarkable by the fact that it had been achieved after a five-year hiatus from the sport.

“Pietie is without doubt one of the finest sportspeople to have been produced not only by the University of Johannesburg, but by South Africa.”

Moss, a five-time nominee, said he was surprised when his name was announced, but glad to be acknowledged for a very consistent spell.

This year, the second dan black belt has earned a fistful of national titles at the all styles, trials and goju championships. In addition, he was crowned the University Sport South Africa (Ussa) champion while leading UJ to a seventh consecutive overall victory.

In July, Moss became the first South African to take three Commonwealth titles in a row. He followed this up with a third place in his first outing at the All Africa Games in September.

At UJ’s Sports Awards, the third-year sports psychology student also received a bronze award in the Student-Athlete of the Year category for maintaining a strong academic record in conjunction with a solid sporting performance.

“I think it all comes down to time management,” said Moss, who is also in the midst of his second degree. “When I travel, I ensure that I make time to study and finish assignments.”

The 24-year-old said his next goal was to become the World Karate Federation’s world champion. The only other South African to have achieved this is Sandra Louw, who won the women’s title in 1994.

He attributed his success to a passion for the sport, while Coetzee said it was all about enjoyment. 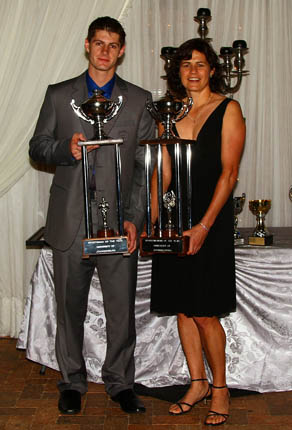