Twenty years on, former Protea cricketer Dave Callaghan is celebrating his victory over cancer by throwing his weight behind a national series of Celebrity Cricket Sixes tournaments in aid of the Cancer Association of South Africa.

First diagnosed with the disease in September 1991, Callaghan received treatment and returned to full health for his first call-up to the national squad a year later.

Having retiring from professional cricket seven years ago, the 46-year-old uses his celebrity status to promote cancer awareness.

“I try to inform people that early detection is very important and that they should not be too scared to consult a doctor.”

Callaghan said sporting events like the Celebrity Cricket Sixes, which is taking place at six major centres across the country between September and February, provided the ideal platform for delivering his message.

He said encouraging people to lead a healthy lifestyle, of which physical activity is an important component, went hand in hand with helping to prevent the disease.

According to research results released by Cansa, despite having a reputation as a sporting nation, 49 per cent of South Africans do not exercise.

Part of Callaghan’s mission is to get people excited about and involved in sport again.

“That’s what the Sixes is about. It’s really about enjoyment.”

The six-a-side format sees half a dozen teams of well-known personalities battling it out in 10 matches of 12 overs each.

“These tournaments are all about fours and sixes; it’s quick and exciting, so it fits in really well with the message we’re trying to get out there,” said Callaghan.

“What we’ve tried to do is use local personalities from each area and let them take ownership of the event.”

He said the gate takings and proceeds from the preceding evening’s celebrity dinner would be donated to the branch of Cansa in that area.

“We really do appeal to everyone to get down and watch their favourite local celebrity, whether it be a rugby player, cricketer, DJ or whatever.

“He’ll either show you that he’s got the skills or make an embarrassment of himself – either way, it’s entertaining.”

As one of the few high-profile sportsmen to have contracted and overcome the disease, Callaghan said he tried to do as much cancer-related work as possible.

He attends various Cansa functions, is a patron of the Cape Town-based Mariette Loots Cancer Trust and shares his personal experiences with victims and their families.

“When I was going through it, I received advice and comfort from somebody who’d had the same cancer I had.”

Callaghan, nicknamed Callas by his teammates, admits the hardest part is when the people he helps lose the battle.

“But I like doing it. I hear so many positive stories from people I’ve spoken to who phone me six months later to say they’re in remission.”

He said Cansa’s work was important in providing support for sufferers and their families, who often struggle more than the patients themselves.

“When I was ill, I didn’t know what Cansa did. I didn’t know you could go there and get information from people to help you through the process.”

Callaghan said he had applied many of the principles he learned on the sports field to his daily life as a cancer patient.

“Like cancer, sport plays mind games with you. One minute you’re on a high because you’ve scored a hundred, the next you’ve been dropped because you’re not making runs.”

He said taking a positive, attacking approach had helped both his healing process and his cricketing career.

“In my first game back for Eastern Province at St George’s, I made 60-odd against (then) Transvaal. To this day it sticks out as one of the highlights of my career and I still get gooseflesh thinking about it.”

Cansa’s head of marketing and communications Lucy Balona said Callaghan’s contribution as a cancer survivor had been extremely valuable.

“We fight cancer by raising public awareness of the importance of prevention and early detection, which enables more effective treatment and a better chance of recovery.”

She said the Celebrity Cricket Sixes gave the organisation good exposure. “It allows us to share our health message of balanced lifestyles and ways to help reduce your cancer risk.” 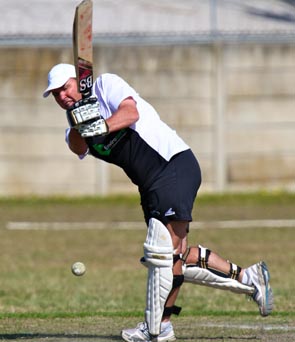