Budding netball talent was brought to bloom over the past seven weeks during the University of Johannesburg’s Netball Spring Games at its Soweto campus.

This community sporting initiative, which took place at the UJ Soweto Indoor Sports Centre, saw eight sides compete for top honours in each of the open and U/21 categories.

Although the university’s first and second teams won both pools in the round-robin tournament, netball development was the ultimate winner. And in keeping with the spirit of the event, the winners donated their prizes to the runners-up.

SUJ1 narrowly defeated the Protea Glen-based Lionesses 25-23 to take Pool A, while, in Pool B, SUJ2 triumphed 27-14 over Mofolo Spurs, who are based at Dorothy Nyembe Park.

The Lionesses are the new kids on the block, having been formed this year by players from various clubs, while the Mofolo Spurs club has been in existence for 11 years.

UJ Netball manager Philip Axsel said his squads had faced stiff competition from their opposition. “There’s a reason these teams qualified for the finals; they are superb players who play with all their heart in every game.”

He said the tournament provided a formal competitive platform for the many informal township teams that would otherwise have limited scope for advancement.

“As a university with a base in Soweto, we wanted to provide an opportunity for these teams to make use of our first-class facilities and show their talent and passion for the game.”

Axsel said that in the past previously disadvantaged athletes had to travel long distances into the city to make use of similar facilities. Without these and support, individuals could not develop their raw talent and get recognition from key role-players.

“This is one of the best aspects of the UJ Soweto campus, where individuals are given an opportunity to study and enhance their sporting careers within their immediate community.”

By hosting events like the Spring Games, he said the university aimed to attract talented players and develop the game in Soweto.

Axsel said the university also hoped to explore possible bursary funding for deserving candidates, provided that they had the ability to study at tertiary level.

“It is our goal to host the UJ Soweto Spring Games on an annual basis and to have many more teams take part.” 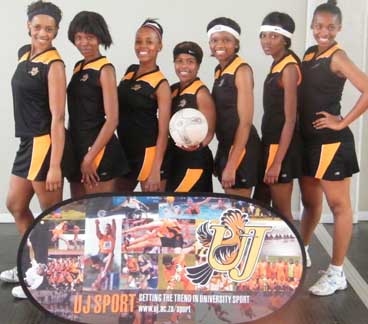 The SUJ1 team showed their skills and community spirit at the University of Johannesburg’s Netball Spring Games, which took place at its Soweto campus. Photo: Supplied by UJ Sport