The sani2c will become the first multistage mountain bike race in South Africa to add a third leg to cater for an ever-increasing demand, organisers announced on Tuesday.

Founder Glen Haw said the new component would further entrench the event’s position as the largest fully serviced event in the world. “I know of no other race that takes a three-pronged approach,” he said.

The event currently consists of a race for serious competitors and an adventure component for competent social riders, who tackle the same 270-kilometre course over three days through southern KwaZulu-Natal.

“The new ride, which we’re calling the sani2c trail, will have the same relaxed approach as the adventure,” said Haw.

With the field previously limited to 650 two-man teams per event and previous participants given preference, he said organisers were permanently inundated with requests for entries.

“We’ve created the trail to accommodate some of the thousands of riders who’ve been trying to get into the event for years.”

Haw said entries for 2012 event, which will be presented by BoE Private Clients, had sold out within hours of opening and more than 2 000 teams were placed on the waiting list.

“We’ve combined the race and adventure waiting lists and offered the first 650 teams who registered on the website places in the sani2c trail.” He said all qualifying teams would be notified of their acceptance via e-mail today.

According to Haw, introducing a new race would not only benefit would-be participants but also rural communities along the route. “From a social development perspective, it gives us an opportunity to reach beneficiaries whom we have not been able to assist until now.”

Haw explained that the sani2c operated on a community-driven business model, which saw local schools, churches and other worthy causes making a profit from the services they provided at the various race villages.

He said that 23 charitable organisations in nine different communities had received a share of the R5.2 million generated from this year’s event.

“The bigger sani2c will also hold increased benefits for sponsors, with more riders exposed to their brands and additional media coverage over the extra days.”

The trio of races will run from May 15 to 19 next year, with a staggered start of one day between them. Registration takes place the day prior to each start in Underberg and the races finish at Scottburgh. 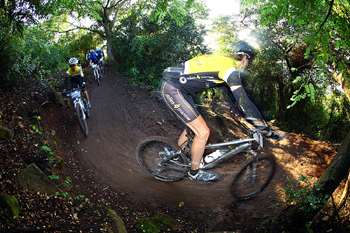 The sani2c will become the first multistage mountain bike race in South Africa to add a third leg to cater for an ever-increasing demand. Photo: Jon Ivins