South Africa’s foremost online lead generation website, JustPlay, has just given away a Hyundai i20 car via its consumer competition portal, the biggest prize to date.

From over 306 000 entries, Port Elizabeth student Megan Snyman was chosen as the winner of the vehicle worth R150 000.

According to chief of play, Gidon Alter, the Johannesburg-based online marketing company used the web-based platform (Click the link to visit the website: www.justplay.co.za )  to drive highly qualified business-to-consumer (B2C) leads for its clients.

“We do this via customised consumer questionnaires. When users register on JustPlay, they select the prizes they’re interested in and fill in a questionnaire belonging to a client.”

Alter said there were over 110 000 registered users on the site, with approximately 70% playing on a weekly basis. “We grow our database by around 400 a day.”

“As a user clicks on the prize they want to win, the system randomly generates a conversational questionnaire sponsored by one of our advertisers. Through the questions, we qualify the lead.

“However, those that don’t meet the advertiser’s criteria are still entered into the competition.”

Alter said JustPlay’s client base ranged from group buying and e-commerce websites to fast-moving consumer goods (FMCG) companies. “A client is typically any business that has a service to offer and is looking for more customers.”

He said the nature of lead generation for the online environment provided immediate benefits for JustPlay clients.

“Insurance advertisers for example want to phone the consumer while he’s still on the website and has expressed interest in their product. Their call centres are geared to answer the lead within 45 seconds.”

Some of their clients simply wanted a bigger database of e-mail and social media contacts, said Alter, and used shorter questionnaires to establish whether a user liked their brand.

“We customise each questionnaire in line with our clients’ campaign objectives and use our expertise in driving them the right customers.”

Alter said the users understood that the website was a platform for advertisers to communicate messages and get them on board with their brand. “The process is completely transparent.”

To enter a competition, he said, the user was only obliged to complete the questions and did not have to opt into the advertiser. “We also don’t serve competing products to the same person.”

Alter said JustPlay benchmarked the success of a campaign according to the conversion rate between the number of questionnaires served and leads generated for clients.

Although 90% of the prizes were funded by JustPlay as part of the company’s marketing overhead, he said clients could also opt to sponsor prizes.

“Our Facebook page has 16 000 members and is the main brand contact point. It is very interactive – we list winners there and survey what prizes consumers want.”

According to Alter, his team put a tremendous amount of effort into creating excitement around the website, including offering bonus entries and increasing the frequency of giveaways to at least one a week.

“Winners are tagging themselves on Facebook and it’s doing a lot to create a transparent and positive energy around JustPlay.”

He said the response had been fantastic and he was looking forward to giving away the next car, a Citroën C3, in two months’ time.

For more information, visit JustPlay or join the Facebook page. 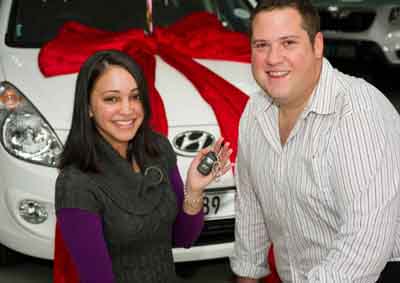