Some of the country’s most recognisable faces have signed up for the Celebrity Cricket Sixes that will be contested at six venues across South Africa from September 24.

Organisers have announced an all-star line-up of over 50 sporting and other celebrities who will make up the six-a-side teams doing battle in the name of fun and charity.

Although the format resembled that of the Hong Kong Sixes, organiser Laurence Finn said the public could expect to see rugby, soccer and cricket World Cup icons go up against Olympic athletes and entertainers.

Finn said the idea for the tournament originated in England, but his company had secured the South African licensing rights and added the celebrity twist.

“You always sit at home and wonder which sporting celebs would be good at another sport. This tournament answers those questions.”

He said the unique handicap format allows teams to remain competitive. “Each team consists of a national cricket legend, a provincial cricketer, a rugby legend, two other non-cricketers as well as a business figure.”

As the fastest form of cricket, Finn said the Celebrity Cricket Sixes was designed for entertainment. “Each tournament consists of 10 matches and each of these lasts for six overs a side.”

He said the response from celebrity participants had been positive. “They had all heard about last year’s inaugural event in PE and were keen to help us take it national.”

Finn said all the players had donated their time because it was for a good cause. The event’s charitable beneficiaries are the Cancer Association of South Africa and JAG Foundation.

As was the case last year, players will interact with spectators before, during and after matches.

All Rugby World Cup matches would be shown live on the big screen, said Finn. “Who wouldn’t want to watch a test match alongside your favourite sporting icon?”

Each tournament features a charity dinner the evening before where celebrities will share their funniest stories. The theme – “What happens on tour, stays on tour; or does it?” – says it all. 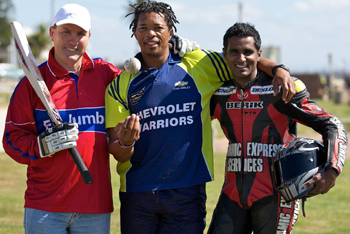 Dave Callaghan, Makhaya Ntini and Arushen Moodley will be among the well-known faces to take part in the Celebrity Cricket Sixes at six venues countrywide. Photo: Richard Huggard