Starting from noon today, riders will have a nine-hour window period to enter the seventh edition of the sani2c mountain bike stage race.

The 2012 event, presented by new title sponsor BoE Private Clients, will take place through southern KwaZulu-Natal from May 16 to 19 next year.

Founder Glen Haw said sought-after slots in the three-day racing and adventure components would be limited to 650 teams per event, with 100 of these allocated to sponsors.

Haw said his organising team were bracing themselves for a flood of interest. “This year’s event, for example, sold out in just one hour and 5 000 applicants were placed on the waiting list.”

He said a new rush entry system had been introduced to deal more efficiently with the demand.

“Applicants will have from midday until 9pm to register their details on our website. Those who raced last year will be recognised by the system and given preference.

“All applicants will then be notified immediately via a system-generated e-mail whether they have been accepted or placed on the waiting list.”

Once accepted, Haw said riders would have until midnight on Sunday to pay the entry fee via credit card and take up their place. “We will then fill up the free spots, if available, from the waiting list.”

However, he said, there was some potentially good news for those riders who found themselves without an entry.

“We are currently looking at the possibility of adding a third event. If it proves to be viable in terms of logistics and rider demand, we will notify those people on the waiting list.”

Haw said the new component would follow the same 270-kilometre route and format as the existing ones, with a staggered start of one day between each of them.

“Should the new ride happen, it would probably be targeted at casual riders, first-timers and corporates.”

He said riders who secured an entry could once again look forward to a number of innovations and improvements on the route.

“This year, we introduced the first suspended floating bridge over the Umkomaas River. For the next one, we want to build a suspension bridge over a waterfall – we’re busy with the environmental impact assessments at the moment.” 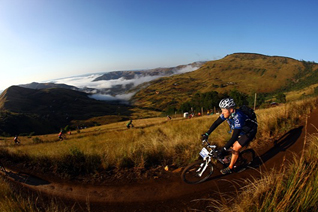