Assisting athletes with disabilities is reaping rewards for the University of Johannesburg (UJ) after a clean sweep at the recent South African Sports Awards at Sun City.

Two of the tertiary institution’s wheelchair tennis players, Lucas Sithole from Newcastle in KwaZulu-Natal and Kgothatso Montjane from Polokwane in Limpopo, were named Sportsman and Sportswoman of the Year with a Disability.

Sithole – SA number one and 14th in the International Tennis Federation’s (ITF) world rankings in the men’s quad division – showed his class when he won the singles title at the Melbourne Open earlier this year.

Montjane, the country’s top women’s player, is ranked 12th in the world.

“These awards recognise the quality of the athletes as well as the work UJ Sport is doing with regard to sportspeople with disabilities,” said Professor Wim Hollander, executive director of UJ Sport. “Their achievement confirms that UJ is becoming a leader in this field.”

Hollander said the university would continue to invest time and money in upgrading its facilities in line with the needs of its students.

“It’s important that student-athletes with disabilities are accommodated from a teaching perspective. The sporting side is just one aspect of a holistic support programme.”

Once they were in the system, he said, the university provided services such as academic, sports-scientific and medical support with guidance from the sports psychology and performance excellence units.

“Their performances are proof that our talent identification and development programmes are working.”

Henriëtte Vermaak, manager of sports for students with disabilities, said it was important to ensure that athletes qualified academically for tertiary study. “We are formalising a student-athlete identification and career guidance process in conjunction with schools for the disabled in Gauteng.”

She said the university had put a bursary structure in place while Sport and Recreation South Africa (SRSA) and the South African Sports Confederation and Olympic Committee (Sascoc) provided financial support to high-performance athletes.

Relationships with stakeholders such as these benefitted students from a funding and opportunity perspective, she said. “The more (opportunities) we offer our student-athletes, the greater the chance of quality performances on the international stage.”

Vermaak said Wheelchair Tennis South Africa (WTSA) had identified Sithole and Montjane as future stars several years ago and had been developing them ever since.

WTSA had selected the university as its provincial centre of specialisation for its high-performance players, she said. “We assist with the academic and sports development programme.”

She said, in conjunction with WTSA, the university also provided the same scientific support to junior players that were coming through the ranks. “At club level, we have scholars and non-students in various sporting codes that are training with UJ coaches for next year’s Paralympics in London.” 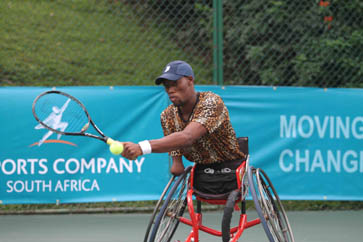 The University of Johannesburg’s Lucas Sithole and Kgothatso Montjane were named Sportsman and Sportswoman of the Year with a Disability at the recent South African Sports Awards. Photos: WTSA