Bobby Behan, the Irishman behind the über-successful Specialized mountain biking and triathlon teams, put his expertise to the test when he saddled up with former Dakar rally champ Giniel de Villiers to ride last month’s Subaru sani2c.

The global sports marketing manager cancelled a trip to the second round of the triathlon world championship series in Japan to be at this year’s race, after work commitments forced him to give up his 2010 entry.

“I heard from Burry Stander and Greg Minnaar that nothing comes close to the sani2c, so I was super, super excited to be there,” says Behan.

The Stellenbosch residents were one of a number of celebrity pairings – including former Springbok captains Corné Krige and Tiaan Strauss – at the three-day event.

Approximately 1 300 teams took part in the off-road journey between Underberg and Scottburgh in southern KwaZulu-Natal.

Behan says mountain biking forms the core of the South African’s rally training, which made him a perfect addition to Specialized’s sponsorship programme alongside the likes of former Formula 1 world champion Jenson Button.

The globetrotting 35-year-old logs around 200 000 air miles and spends approximately 200 days away from his adopted home each year.

The constant travel makes his training schedule difficult to maintain. “Some weeks I manage to ride four or five times, others twice.”

Behan says he clearly remembers the day he arrived in Stellenbosch. “It’s funny, but I knew there and then that I had just discovered the best town in the world.”

It was 1999 and he was looking for a sunny spot in the southern hemisphere for pre-season training when he stumbled across the picturesque town.

“I needed to find somewhere warm after a pretty successful season racing in the US,” recalls Behan. “Boston gets cold in the winter and Ireland wet!”

Two years later, despite doing relatively well on the professional circuit, Behan says he realised he was “never going to be a Jan Frodeno”. Low on funds, he took a job at Oakley back in his native Emerald Isle.

But in 2004 the urge to compete surfaced again. Much to his surprise, he placed fifth in his first international outing and went on to win the Irish national title.

He quit his job and returned to South Africa to focus full-time on triathlon. “My love affair with the country had never ceased and Susi and I remained the best of friends. It was good to be back.”

When the Swiss signed with the Specialized global mountain biking team in 2006, Behan got the chance to check out their tyre-testing programme first-hand. “It was pretty cool.”

After the team manager resigned, Sauser recommended Behan – who got the job. “I managed Specialized racing from 2006 to 2009; it was a great period with many fond memories.”

Some of the highlights included Sauser’s victories in the world marathon (2007) and cross-country (2008) championships.

“It gave me so much pleasure to sign Burry, who I believe is a great talent. He can go a long, long way.”

Almost by default, Behan progressed into the role of global sports marketing manager for mountain biking, which necessitated a move to Specialized’s California headquarters in 2008.

Never one to rest on his laurels, he also asked to take on the triathlon programme. “No one was actively looking after the sport and I felt improvements could be made.”

Adapting many of the elements and structures from the successful mountain biking side – including mechanics, soigneurs and support vehicles – Behan set about creating what is now arguably also the best triathlon programme in the world.

“One can never get complacent,” says Behan. “The way we approach the team and the programmes is constantly evolving.” 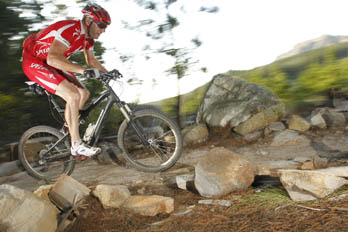