What started as a fundraising venture for a local school has become a multi-million rand social development initiative for rural communities throughout Southern KwaZulu-Natal.

Despite a decision to reduce the number of entrants this year, and with the help of inflation, organisers are confident that they will match or improve on that figure.

“There are no volunteers – every organisation that works on the event is paid for its services,” said organiser Glen Haw, who pioneered the community-driven approach.

He said it was a foolproof way for communities to raise money for their schools, churches and charities while adding value to the off-road event, which comprises a more social adventure component (May 18 to 20) and a race (May 19 to 21).

“For each of these, there is a core team of 125 people,” said Haw. “It’s difficult to estimate, but the total manpower involved would probably be closer to 2 000.”

Haw said the services required included route marking, the manning of waterpoints, catering, bike washing, security, cleaning, setting up of tents and so on.

He said although they could sometimes source these functions slightly cheaper commercially, organisers chose to make a difference in their immediate surrounds.

“The work delivered must conform to a certain standard though,” said Haw. “At the end of the day, I need to be able to justify the costs to my riders.”

Where possible, he said, organisers lined up appropriate sponsors but then handed over the responsibility for managing negotiations and logistics to the community organisations.

He said it was a proven empowerment model, which had been refined over the years and adopted by a number of other races including the Fairbairn Capital/Old Mutual joBerg2c and FedGroup Berg and Bush.

As a farmer himself, Haw said he was aware how crucial sustainability was for the fragile rural economies that formed the backbone of the agricultural industry.

“My wife and I were prompted to start the sani2c because our kids were young at the time and needed a good school,” said Haw.

“What started as a fundraiser for one institution became something for the entire community.”

According to Haw, the race participants themselves had also started a number of charitable initiatives.

“Msayana School in the Umkomaas Valley now has solar-powered classrooms equipped with televisions and educational DVDs, thanks to a R400 000 investment by one competitor.”

Another school to benefit from riders’ generosity was Lynford, which received an annual bursary fund for deserving students.

Aside from the direct developmental benefits, Tourism South Africa estimates that the race generates a further R40 million annually in indirect spending for the region. 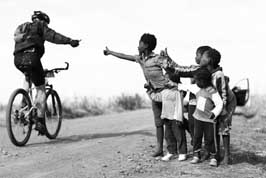 The Subaru sani2c has evolved into an empowerment initiative for the communities along its route. Photo: Kelvin Trautman