Participants in the world’s largest mountain bike stage race will undertake an adventure of biblical proportions when they ride “on” the raging waters of the Umkomaas River for the first time on May 20.

Riders in the three-day Subaru sani2c traditionally descended into the valley and then followed the course of the river on the second stage between Ixopo and Highflats, but this year they will cross it as a result of yet another innovation by the organisers.

The race was the first to incorporate a floating still-water bridge and now it has pioneered a semi-suspended variation that spans the fast-flowing river in Southern KwaZulu-Natal.

Originally built for use on standing water, the latest incarnation incorporates cables in its design to counter strong river currents. The Umkomaas flows at a rate of 200m3 per second, placing approximately 60 tons of pressure on the structure.

The bridge was “road-tested” during the penultimate stage of the nine-day Fairbairn Capital/Old Mutual joBerg2c – which incorporates the Subaru sani2c route – earlier this month.

Despite some initial scepticism about its feasibility, the route builders decided to take a calculated risk in introducing the innovative bridge, which is suspended on top of two cables and supported by pontoons on either side.

“The engineers looked at the worst-case scenario, factoring in one-hundred-year flood levels, while we were a little more positive,” said organiser Glen Haw.

He said the six-ton temporary structure could easily support the weight of about 30 adults and had a built-in safety mechanism. “In the event of a flood it doesn’t wash away – it just swings out and pushes onto the riverbank.”

Haw described the basic structure as a galvanised steel framework, consisting of three-metre floated steel sections bolted together. “Wooden planks are then fastened to the steel sections to form the walkway.”

He said his route builders, under the direction of Ant Foster, had spent four days installing anchors and posts to secure the 86-metre long bridge.

“Once the support structure is in place, the whole thing can be put up or dismantled in a day – it’s a completely portable bridging solution.”

Haw said the structure had been thoroughly tested as the river was at near flood level at the time of construction and expressed his confidence that this would be yet another groundbreaking initiative for the race.

“The design of our first steel-and-pipe bridge has been copied but never quite perfected,” added Haw.

“In 2008, we introduced the curved, floating and sometimes submerged version, which became a highlight of the dam crossing on day one. We hope the response to the new river crossing on day two will be even better.”

Around 2 600 riders will put the structure to the test when they cycle from Underberg through the Umkomaas Valley to Scottburgh. 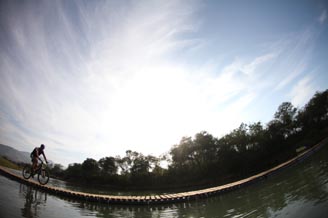 Participants in this year’s Subaru sanic2c will encounter another innovation by organisers when they cross the Umkomaas River on a semi-suspended, floating bridge on day two. Photo: Kelvin Trautman