David George and Kevin Evans (Nedbank 360Life) earned themselves the favourites tag for the Subaru sani2c mountain bike race that starts on Thursday after a dominating performance at this past weekend’s MTN Tulbagh ultra-marathon.

“We’re going there to fight for a win and, on paper, we’re more than capable,” said George, who took his second win of the prestigious national series and with it the overall lead.

His team-mate Evans, a four-time Subaru sani2c champion, proved he had also returned to form with a determined second place after breaking his collarbone at the Absa Cape Epic in March.

George conceded the sani2c was a major objective for them. “We planned our season around two big peaks, the Epic and now.”

He said that despite the bad luck at the beginning of the year, they were still one of the strongest teams going into the three-day race through southern KwaZulu-Natal.

“With the base miles, experience, talent and physiology that Kevin’s got, he’ll only improve as the days go by.”

The pair won the race in 2009 but last year George rode with Renay Groustra, who withdrew after falling ill on day one.

He said, based on the past weekend’s performances, that the experienced team of Max Knox and Rwanda’s Adrien Niyonshuti (MTN-DoItNow) would probably be their major opposition. “But we had a fairly convincing win, so only time will tell.”

George also singled out what he called the “odd mixture” of Brandon Stewart and national road champion Darren Lill (FedGroup Berg and Bush) as possible contenders. “They’re both physically strong but Darren is not as technically proficient.”

He acknowledged that, unlike their rivals, they had not competed in the recent nine-day Fairbairn Capital/Old Mutual joBerg2c and would probably be fresher.

The 35-year-old former time-trial specialist said most of his training had been focused around the physical requirements of explosive three to four-hour races, and spending more time at threshold.

“We’re mentally in a really good place, both of us. The sponsor hasn’t put any pressure on us to perform – the pressure comes from us.”

The Capetonian said the event, in which riders battle it out from Underberg to Scottburgh, held “lots of scope for decent racing” and they would take it one day at a time.

“We’ve seen the sani2c explode on day one and it often comes down to the line with one or two teams. The finish is difficult and, if you’ve got the legs, you can take valuable seconds out of a team very quickly.”

He said stage two was theoretically the hardest, but the flat-out racing during stage three meant they would need to make good use of their opportunities.

“It’s a beautiful race, which we’ve enjoyed every time we’ve done it. It’s supported by BOE, a subsidiary of our sponsor, so it’s obviously important for them as well.”

George said moving the event from its traditional date in March to May (19 to 21) had suited them well as it presented the opportunity for more competitive racing later in the season. “It gives us something to build on towards the world champs in June.”

The women’s race has been blown wide open with the withdrawal of joBerg2c champion Ischen Stopforth (Team bizhub). Stopforth, who overcame a puncture and a crash to take third at Tulbagh behind her partner Catherine Williamson, was bitten by a dog during a training ride on Monday.

“There’s some bleeding in the quad muscle above the knee and that’s your piston that drives the engine,” she said.

Williamson, of Britain, will now be partnered by cross-country rider Candice Neethling, who placed fourth in Tulbagh. “They’ll still go for the win – they must do it for me!”

Reigning champions Yolande Speedy and Mariske Strauss are not expected to defend their title as Speedy is recovering from recent surgery. 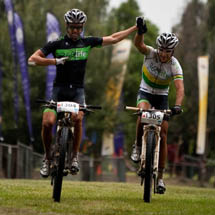 David George and Kevin Evans of Nedbank 360Life are in ominous form ahead of the Subaru Sani2c that starts on Thursday.