The breathtaking descent into the Umkomaas River Valley is set to make a welcome return to the three-day Subaru sani2c mountain bike race that takes place from May 19 to 21.

However, organiser Glen Haw said the decision to move this year’s edition to the region’s “dry season” should once again see it fit for riding.

“The Umkomaas is, without a doubt, the heart and soul of the race. Being able to cross the river safely opens up a whole lot of options for us.”

He said apart from a short climb, riders literally pointed their bikes downhill after the start line at Mackenzie Club in the Ixopo region. The total descent for the day is 2 100m.

Months of planning and hard work have gone into making this portion of the route as safe and free flowing as possible, said Haw.

“It’s like riding on your pavement but downhill with a great view and plenty of switchbacks.” He advised riders to keep their eyes on the next corner and to “ride with confidence”.

Haw said participants who had previously done the valley descent could look forward to a lot of changes – including a new 30km section and two river crossings.

“This new stretch has to be some of the best flowing single track we have ever produced – it’s what every mountain biker dreams of.”

He said the route had initially followed an old road with sections of concrete strips that became slippery and dangerous in wet conditions. “Together with the community, we’ve been digging a safer route along existing contour paths.”

According to Haw, much of their efforts had gone into this section, which is considered by many – including cycling analyst Andrew Mclean – to be among the best in the world.

He described the second stage, which finishes at Jolivet, as “mind-blowing but tough”.

It starts at an altitude of 1 200m and descends through pristine thornveld on hand-cut single track paths in the Umkomaas valley for 41km. The route then turns upwards, following one of the river’s tributaries to the 70km-mark.

There is some respite for riders over the somewhat “easier” final 25km as it undulates to the race village at Jolivet Farm. Haw said the total ascent of 1 716m over a distance of 95,4km makes this the toughest of the event.

Day one provides the first glimpses of the Drakensberg and includes some picturesque farm crossings en route to the first overnight stop at Mackenzie Club.

The 271km race through southern KwaZulu-Natal starts in Underberg and culminates on Scottburgh’s main beach. 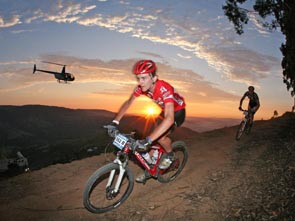 Max Knox of DCM plunges down one of the picturesque descents in the Subaru sani2c. Photo: Jon Ivins