Kerin edged out the 18-year-old by the narrowest of margins when they last went head-to-head – in the 3km Speedo Challenge at the aQuelle Midmar Mile – in February.

With over R70 000 in prize money, the eight-kilometre race promises to be one of the highlights on the watersports programme that forms part of the annual Nelson Mandela Bay Splash Festival (April 22 to 25).

“Kerin is one of the top 10 swimmers in the world over 10 kilometres and obviously the big favourite,” said watersports coordinator Michael Zoetmulder. “But don’t underestimate Railoun – he’s among the best in the country.”

The Capetonian, who will be making his debut in the PE race, said he was looking forward to the tussle with Kerin. “I’m confident of reversing the result.”

He said his training had gone well ahead of the event, which would be preceded by this weekend’s SA Open-Water Championships at Marina Martinique in Jeffreys Bay.

Veteran long-distance swimmer Roger Finch, who is preparing for an English Channel crossing in August, will also be on the start line.

In the women’s race, Zoetmulder said the contest would be between Indian siblings Rashmi and Richa Sharma – the first sisters to cross the Strait of Gibraltar, the Western Cape’s Dominique Dryding and PE’s Jessica Roux.

The latter, who is training in Durban, took gold in the women’s 5km open-water event at the African championships in Morocco last year.

She is all systems go after recovering from a shoulder injury that saw her sidelined for last year’s race.

Roux said she and Dryding had competed against each other on numerous occasions. “She’s a super swimmer and familiar with open-water racing, so I expect an exciting duel.”

Zoetmulder said promising young swimmers would get their chance to impress the following day in the kilometre-long Izani Siqubhe swim, which features special cash prizes in the development category.

The watersports programme gets off to a high-profile start on the opening day when world surf ski champion Dawid Mocke attempts a hat-trick of wins in the 26-kilometre Nelson Mandela Bay Surf Ski Classic.

Throughout the long weekend, the country’s top jetskiers will make waves in the third round of the SA Jet Ski Championships and the top Eastern Cape P750 inflatable boats will take each other on in regional surf and circuit events.

The King of the Bay – with its elimination swims, beach flags, beach sprints and Malibu board events – brings the programme to a close on the Monday.

Aquatic action continues after the festival when top sailors congregate in the Bay to compete in the annual Algoa Bay Yacht Club Week regatta from April 27 to May 2.

Watersports events are open to the public. Visit www.splashfestival.com or contact Zports on 041 484 7860. 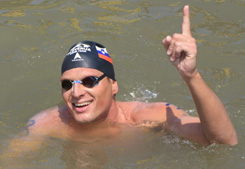