When the South Africa A cricket side takes to the field for the fifth one-day international against Bangladesh A on April 29, they will be without newly appointed captain Jacques Rudolph.

The Nashua Titans batsman will be missing the final ODI due to a standing commitment to the nine-day Fairbairn Capital/Old Mutual joBerg2c mountain bike race, which starts on the same day.

“Unfortunately, the series was only announced in March and Gerald de Kock and I have been organising our participation in the race for months.”

Rudolph and sports commentator De Kock will be tackling the 900-kilometre journey in aid of charity, the details of which have not yet been finalised.

“It obviously involves sponsors I have already committed to and I felt withdrawing from the last game was the honourable thing to do.”

According to Rudolph, national convenor of selectors Andrew Hudson understood the situation.

He said five other players – Rilee Rossouw, Jonathan Vandiar, Rusty Theron, Wayne Parnell and Colin Ingram – were not considered for the tour due to their Indian Premier League commitments.

A mountain biking novice, Rudolph said he found ample time to spend in the saddle after the day’s cricket session but admitted “my bum gets a bit sore”.

“I started training six weeks ago and love it. It helps with my overall fitness, which is obviously beneficial to my cricketing career.”

Rudolph said his endurance would be put to the ultimate test during the Fairbairn Capital/Old Mutual joBerg2c, which starts in Heidelberg south of Johannesburg and crosses remote Free State farmlands before heading down the escarpment to finish at Scottburgh on the KwaZulu-Natal coast on May 7.

“I absolutely love the adventurous spirit of mountain biking and this race is a fitting one for my debut . . . or not!”

The event, which pits 300 two-man teams against a gruelling course, is the longest full-service mountain bike race in the country.

Rudolph said, tongue firmly in cheek, that he would relinquish the captaincy of this particular team. “Gerald will be leading from the front.”

In response to the suggestion that the series might be 2-2 heading into the final encounter, Rudolph said he hoped “we won’t be in that situation”.

He said he was very excited about his appointment to lead both the one-day and four-day squads.

“I’ve been out of the South African scene for some time and will grab this chance with both hands. Hopefully, it’s a stepping stone in the right direction.”

Rudolph was released from his contract with English county side Yorkshire last year because he and his wife Elna wanted to return home.

The decision proved a good one, as solid domestic performances while leading his franchise this summer have caught the attention of the national selectors.

“I’d like to play for the Proteas in the near future and hopefully end my career on a high note.” 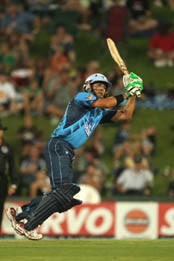 South Africa A captain Jacques Rudolph will miss the fifth and final one-dayer against Bangladesh A due to his participation in the nine-day Fairbairn Capital/Old Mutual joBerg2c mountain bike race.