In line with an event like the Absa Cape Epic, the first two-man team to cross the finish line in Scottburgh on May 7 will pocket R100 000. The total prize pot for the men’s, women’s and mixed racing teams is R300 000.

“We want to encourage the professionals who devote their lives to this great sport to race the beloved country,” said Wapnick. “By only paying prize money in the racing section, we are better able to show our support for pro riders.”

At the same time, Wapnick said, the organisers wanted to ensure that the Fairbairn Capital/Old Mutual joBerg2c retained its pure mountain biking spirit for the majority of riders.

“For most of the entrants, it’s the achievement of riding across this awesome country that’s the major motivating factor,” said Wapnick.

The tour starts in Heidelberg near Johannesburg on April 29 and crosses the agricultural heartland of South Africa to finish on the KwaZulu-Natal south coast nine days later.

Now in its second year, the exclusive event accommodates a field of 300 teams on the more than 900-kilometre off-road journey.

“The race currently has a very strong local flavour. We are quite happy to let it evolve and for the prize money to go to local riders to assist them in their careers,” said Wapnick.

He said attracting the country’s top professionals would also serve to generate better media coverage for the event and its sponsors.

“Some of the big names confirmed for this year’s race include Kevin Evans and David George from Team 360Life, and last year’s champions Andrew Mclean and Shan Wilson from Toyota-Cycle Lab.”

Fairbairn Capital general manager Stuart Loxton said his company recognised the power of the mountain biking market. He said sponsors had become more discerning over the years and did not only select events based on exposure.

“We look for the positive associations – like similar core values, community upliftment and social investment – when sponsoring events like the Fairbairn Capital/Old Mutual joBerg2c.”

As part of its financial commitment, the company will also remunerate the farming communities who run the race villages and water tables along the route, said Loxton.

“The money raised in this manner will be ploughed back into various local schools, churches and community organisations.”

For more information on the race, visit www.joberg2c.co.za. 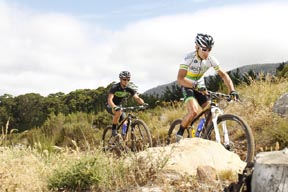 High-profile mountain biking duo Kevin Evans (right) and David George (Team 360Life) will compete for a share of the prize purse in the second edition of the Fairbairn Capital/Old Mutual joBerg2c.

Coetzee Gouws
082 575 7991
041 368 4992
coetzee@fullstopcom.comThis e-mail address is being protected from spam bots, you need JavaScript enabled to view it
www.fullstopcom.com