Legendary Tour de France commentator Phil Liggett will indulge his twin passions of cycling and South Africa when he sets off on the nine-day Fairbairn Capital/Old Mutual joBerg2c off-road race from April 29.

“With its terrific countryside, South Africa was made for cycling, especially mountain biking,” said Liggett, who divides what little leisure time he has between his holiday home in Gordon’s Bay and game farm near Phalaborwa.

Known worldwide as the “voice of cycling”, he flies almost 200 000 kilometres a year, doing broadcast work for various channels including ITV in Britain, Versus in America, SBS in Australia and, locally, M-Net.

He has covered 38 Tours de France, 13 Olympic and seven Commonwealth Games. Aside from cycling, he also commentates on triathlons and ski-jumping.

Liggett is currently in the country after doing commentary work on the Cape Argus Pick n Pay Cycle Tour – the race that first brought him to these shores in the early nineties. He will jet in again in time for the pre-race registration at Melrose Arch in Sandton on April 28.

“I think the joBerg2c is taking mountain biking back to grass roots,” he said. “It’s a great opportunity to ride in safe conditions over a spectacular route.”

Fairbairn Capital general manager Stuart Loxton said apart from being a cycling legend, Liggett shared a love for the country, its people and particularly its wildlife.

“Phil’s participation just confirms the appeal this well-organised race already has in its second year. It’s our pleasure and honour to be able to facilitate his presence.”

With Liggett swapping his microphone for a mountain bike, 600 fellow participants will get the rare opportunity to sweat it out alongside him as they cross the picturesque agricultural heartland of the country.

The 900-kilometre tour starts in Heidelberg just south of Johannesburg and finishes on the beach at Scottburgh in KwaZulu-Natal on May 7.

Liggett’s gruelling globetrotting schedule prevents him from completing the full race and he will be heading home to London after day five.

He’ll wrap up his tour with a live broadcast from the event. “I’m just a bit worried that I won’t make it in time for the start of the show!”

An active road cyclist, he said he was looking forward to the event but admitted he had never ridden 100 kilometres on a mountain bike “in my life”.

Liggett said that, unlike other top races, this one had “relaxed” elimination times (riders have to be in by dark), giving the average rider a chance to take part in a long-distance race.

“There’s no pressure. By the end of the nine days, you get the feeling that you’ve achieved something really special.”

As an avid birdwatcher and patron of BirdLife SA, Liggett is also looking forward to some exciting sightings.

“Last year, I saw the Cape parrot, wattled crane and crowned crane – three of the rarest birds. I only saw them because I was on a bicycle deep in the countryside.”

According to a member of the organising trio, Craig Wapnick, a key feature of the race is that riders have the unique opportunity to cycle across remote farmlands of all description.

“The farmers not only build special tracks across their lands but also demonstrate their renowned hospitality at the nine race villages along the route,” said Wapnick.

“With the assistance from the farming community, one really has a great feeling that everyone is one big family,” said Liggett. “I like that.”

He was awarded the Member of the Order of the British Empire (MBE) in 2005 for services to cycling and was inducted into the British Cycling Hall of Fame last year.

For more information on the race, visit www.joberg2c.co.za or join the Facebook group. 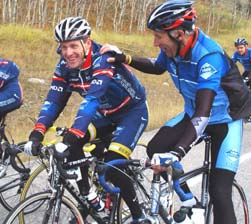