When mountain biker Elanie Potgieter decided to take on the nine-day Fairbairn Capital/Old Mutual joBerg2c, she set about pushing her body to the limits for children who will never enjoy that freedom.

On April 29, she will set off on a 900km journey across the heart of South Africa to raise funds and awareness for the Our Kids of the Cape Fund, a non-profit organisation that supports wellness and education projects in the Western Cape.

Registration at the glitzy Melrose Arch in Sandton on the eve of the race will be in stark contrast to the experiences that await her off the beaten track between Heidelberg, south of Johannesburg, and Scottburgh on the KwaZulu-Natal coast.

Potgieter aims to raise R100 000 to buy wheelchairs for one of the fund’s long-term beneficiaries – the Woodside Sanctuary in Rondebosch for children with profound physical and mental disabilities.

“I feel so blessed to have the ability to ride my bike,” said Potgieter. “I’ve been mountain biking for three years but I’m a complete novice as far as stage races go – and now I’m taking on one of the big ones!”

The Fairbairn Capital/Old Mutual joBerg2c is the longest paired, full service stage race in the country.

Stellenbosch-based Potgieter will be attempting the feat with new team-mate Irenee Heyns after her fiancé, Carl Fourie, fell and dislocated his shoulder during a training ride in January.

She said the race would be “all about honesty and teamwork” and that their training had been going well. “I think the preparation beforehand is tougher than the race itself.”

Team Kids of the Cape successfully completed its first stage race – the three-day, 234km Columbia Grape Escape – this past weekend.

These two races have been assimilated into the event – from days four to six and seven to nine respectively.

As a token of goodwill, the title sponsor has paid for Team Kids of the Cape’s entry.

Fairbairn Capital general manager Stuart Loxton said he was thrilled that participants were using the race as an opportunity to make a difference in their own communities.

“The integrity of the event is incredibly important to us. The race is about more than just the individual rider’s drive to succeed – it is about the human experience and pushing the envelope in order to help others.”

When Potgieter is not on the bike, she is general manager of the four-star d’Ouwe Werf Hotel in Stellenbosch, which – with the Vineyard Hotel and Spa in Newlands and the Townhouse Hotel and Conference Centre in the Cape Town CBD – established the Our Kids of the Cape Fund in 2007.

Guests are encouraged to contribute to the fund by adding a negligible amount (generally less than R5) to their bill. The hotels then match their contributions rand for rand in support of four long-term beneficiaries and various ad hoc projects.

“We asked ourselves how we could have the most impact with our money,” said Potgieter. “Our long-term vision is to involve more hotels in the programme.”

She is campaigning for hotel guests, fellow cyclists, friends, family and business associates to sponsor her ride – either per kilometre or via a donation.

To follow her blog or to make an online donation, go to www.ouwewerf.co.za and click on the “living green & social awareness” link.

For more information on the race, visit www.joberg2c.co.za or become a member of the Fairbairn Capital/Old Mutual joberg2c Facebook group. 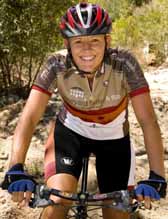 Mountain biker Elanie Potgieter (Team Kids of the Cape) will push the limits of endurance when she takes on the nine-day, 900km Fairbairn Capital/Old Mutual joBerg2c from April 29 to May 7 in aid of disabled kids.