The Herald VW Cycle Tour may be a shade greener this year following an appeal by organisers for riders who have participated in 10 or more editions of the national classic to contact them.

“We are updating our records for the exclusive green number club and want to ensure that we don’t miss anyone,” said race director Shane Bradfield.

With the 105-kilometre feature race taking place for the 26th time in Port Elizabeth on February 6, it is hoped that more riders will join this elite group.

“It is our way of honouring the regulars,” said Bradfield. “These cyclists will have their green number for life and wear it every time they take part.”

Results were manually captured when the race first started and this was complicated by the introduction of a number of different systems over the years.

“We are relying on cyclists to approach us and supply proof of all their participations.“We will then go through the various systems and crosscheck the data and, once confirmed, the green number will be issued.”

According to Bradfield, members of the green number club would still start in their usual groups.

Their newfound status would, however, place them in such illustrious company as tour co-founder Rob Rudman and multiple ladies’ race winner Anriette Schoeman.

With just over 110 qualifying cyclists confirmed to date, green will be the colour to envy on race day.

Because the mountain bike challenge – which takes place at Addo on February 5 – was added to the tour in 2005, only road race participants are currently eligible.

Tour veteran Duane Nel, who looks forward to riding in his 22nd race this year, said it felt very special to wear his permanent number.

“I rode my first Herald in 1990 and have never stopped. I actually rate it as the best classic in the country.”

Nel said the race had become far more competitive in recent years but that he himself was much more relaxed about his time.

“I’m far more interested in having an enjoyable ride.”Last year, he took his vuvuzela along. “Being a World Cup year, it just seemed appropriate!”

Former mayor Charles Garai, who will be riding his 24th tour, is believed to be the cyclist with the most races under his belt.

“One year, I did something no-one else has done – I sat on my bike, fired the starter’s pistol, handed it to (mayoral chauffeur) Monty (Uren) and rode away!”

Garai is also a member of the double dozen club started by Rory Hilton – for riders who have completed 12 editions of both The Herald VW and Cape Argus Pick n Pay cycle tours.

“We’re currently just a very exclusive little club of 12 members,” said Hilton. “I started it in 2003 and am now trying to revive it.”

Cyclists have until January 31 to enter the race – either via the website www.heraldcycletour.co.za or by collecting an entry form from any cycle shop in Nelson Mandela Bay.

To apply for green number status, contact Shane on 074 114 4811 or e-mail events@leisurecycletours.com. 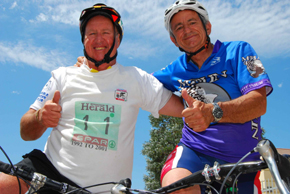