Spontaneous applause breaks out as the cyclists whiz past spectators in a blur of colour, but this is no international tour.

It is just another training ride for the Siyanqoba Cycling Club on the streets of New Brighton in Port Elizabeth.

“We’ve never had such things in the townships,” said club chairman Yster Xatasi. “People are very interested and cheer whenever they see us – you’d be surprised!”

Xatasi and his committee started Siyanqoba (which means “to conquer”) in January 2009 with just 15 members. Today, there are 135 from New Brighton, KwaZakhele, Zwide, Motherwell, KwaDwesi, Booysens Park, Walmer and the Northern Areas – and the club is still growing.

“Yster and his team went all out to set up the club successfully,” said ECC chairman and The Herald VW Cycle Tour race director Shane Bradfield. “We could see that here was an organisation that was really doing something.”

On the strength of the club’s commitment to the sport, Siyanqoba was chosen as the official beneficiary of last year’s The Herald VW Cycle Tour Development Fund. It received R10 000 plus a media assistance package from the sponsors.

The club will once again benefit from the tour this year, which takes place on February 5 and 6.

At least 10 Siyanqoba cyclists will participate in the mountain bike challenge in Addo on the Saturday and 20 in Sunday’s road events, which start at Hobie Beach.

Xatasi’s son, 17-year-old Bonani, will also be hoping for a top spot – he was the second junior male in the 65km Challenge in 2010. He was invited to attend Cycling South Africa’s mountain bike high performance squad workshop in Durban in December.

In the road race, Xatasi has predicted a top 20 finish for Andile Booysen, who was invited to the SA Track Championships in Cape Town last year along with team-mate Thembani Qashani.

While members’ achievements indicate that Siyanqoba is making all the right moves, it has also created a number of challenges.

“Some of the more established clubs that have the money are luring our top cyclists away. We can’t keep them long enough to develop the club properly,” said Xatasi.

He cited a lack of support from local government as another negative factor – a flawed tender and the recent cash crisis have stalled any funding for bicycles from the municipality.

“Now that we don’t have a sponsor, we will use the money from The Herald VW Cycle Tour for race registrations for our top cyclists throughout the year. For some of the children we will buy cycling shirts and other essentials.”

For more information or to enter, visit www.heraldcycletour.co.za. 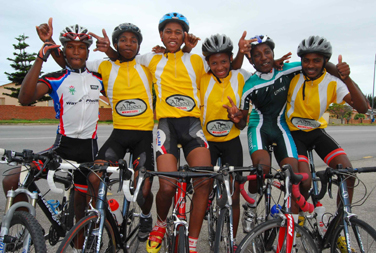