With just under a week to go, Half Ironman charity team 70point3 is more than halfway to its fundraising target of R70 300 for Port Elizabeth’s Zanethemba Baby Haven.

Forty community-minded athletes will don the eye-catching Zanethemba race vest as they aim to conquer the Spec-Savers Ironman 70.3 South Africa in Buffalo City on January 23.

To date, the team has raised over R36 000 and organisers are calling on members of the public to open their hearts and wallets to abused and abandoned children.

According to first-time competitor and organiser Kristen Britz, corporate sponsors had been very generous, with Mondi, Tenneco and Steers contributing R15 000, R10 000 and R2 000 respectively.

“We’d also really like ordinary people to become sponsors and show their support for both the athletes and the haven,” said Britz. He added that a few extra race vests had been ordered in case any Ironman 70.3 entrants still wanted to join the team.

“There has been a lot of excitement from the individual athletes and we’ll also be entering two teams in aid of Zanethemba.”

Britz said, in addition, three-person teams would take part in the mixed category, with each specialist athlete completing only one of the legs – the 1.9km swim, 90km cycle or 21km run.

“One of the teams is quite sharp, so we are hoping for a good result.”

Fellow organiser Lindy Taverner will be running in the team category, as she had been too late to enter the individual event.

Britz said he had taken a short break over the festive season but that his own training was back on track. “It’s good to have a bigger cause to help keep you motivated.”

He said all funds raised would go towards Zanethemba’s general running costs and any new projects it embarked on this year.

“The haven is incredibly well managed and is a registered charity, so any donations made will qualify for a tax certificate.”

Members of the public can donate via credit card or transfer on the team’s website (www.70point3.co.za) or make a direct deposit to Zanethemba Charity Foundation (Standard Bank cheque account number 080417337, branch code 050-017).

Alternatively, supporters can SMS the word “TRI” plus their chosen athlete’s name to 38021 at a cost of R10 per SMS. 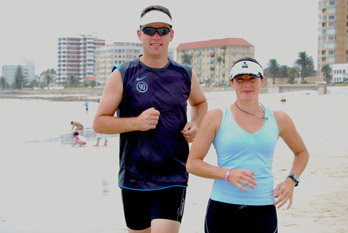