Riding in her first race for Team bizhub, the 19-year-old completed the challenging course in 2:40:42 to hold off Port Elizabeth’s experienced Andrea von Holdt (38) by two seconds.

“I’m very happy to have won my first race with the team. We always aim to keep our sponsors happy and this is the perfect start,” said De Wet, who hails from Molteno in the Eastern Cape but trains out of Stellenbosch.

De Wet said she was especially wary of Strauss before the race. “I knew her tactics would be to try and get rid of me on the first big climb, but I managed to stay with her.

“Then, about halfway through, I noticed that she was starting to struggle and I increased my pace until I had a gap.”

The bizhub rider – who finished third last year behind Cherise Taylor and Candice Neethling – remained out in front until the latter stages when she was caught by Von Holdt.

“I noticed that I was being reeled in by Andrea and a male rider on the final flat stretch. I had been battling into the headwind on my own and was quite tired at that point.”

Von Holdt joined De Wet up front, but slipped on the technical run-in to the finish to hand the victory to the latter without a fight.

“It was unfortunate for her, but suited me as I’m never keen on sprinting. I heard her slide as we turned off the concrete strip (that linked the final downhill with the finishing straight) and knew I had the race in the bag.”

De Wet said the slightly altered course – which included lots of short, sharp hills – was tougher than the previous year and “the muddy conditions made it even worse”.

Although she felt sprightly during the first half, she admitted that she had very little left in the bank over the closing kilometres and was worried when Von Holdt latched onto her.

“It’s now a question of my body needing to get used to the intensity of racing after all the long training hours.”

George’s Ischen Stopforth (6:19:07) made it a solid opening weekend for Team bizhub by placing third in the 121km MTN Attakwas marathon – the first leg of the MTN Series – between Oudtshoorn and Groot Brak River.

“With 2 600m of ascent through some of the roughest terrain our country has to offer, this race is a challenge and a wake-up call this early in the season,” said Stopforth, a former series champion whose main priority was to get through the event unscathed.

“Last year I fractured my pelvis and collarbone in a crash only a week after the Attakwas and I ended up spending most of the year recovering, trying to get back in form before getting injured again.

“The last time I went through the Attakwaskloof (at the DCM Cape Pioneer Trek in October), I ended up falling and breaking three ribs and this increased my respect for this extreme event.

“I was very apprehensive before the start, but pleasantly surprised when I was able to stick with the front girls early on. When I dropped off the front pack in the foothills of the Attakwaskloof, I did not panic and just rode my own race.” 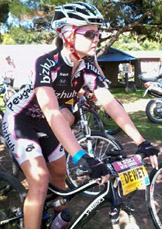 Caitlin de Wet (19) had the best possible start with Team bizhub when she won the 52km Nissan half-marathon at the Attakwas mountain bike event in Groot Brak River outside George on Saturday.