The JSE-listed property group Pangbourne has snapped up an industrial development at Greenbushes in what is being described as a landmark industrial property deal for Port Elizabeth.

Jansen van Rensburg said the 441 000 square metre (44 hectares) development, which consists of 67 erven, was setting new standards in the local industrial property sector. “The development is housed in a state-of-the-art secure industrial environment complete with an access control gatehouse,” he said.

Gavin Dickinson, of Gauteng-based Dickinson Projects, said they will spend an additional R600 million in developing the industrial park over the next three to five years.

According to Jansen van Rensburg, he and Bellingham bought the ground as farmland in 2005 with the intention of developing it as industrial ground. “Our initial plan was to develop it right through to the construction phase and then sell off the different stands piece by piece.”

However, the rollout of the project took a different course when Pangbourne approached them in July last year after identifying the facility as a perfect investment to expand their national property portfolio in the region. Their (Pangbourne) net asset value, estimated at R4,5 billion, is spread countrywide and the group was looking for opportunities to increase their presence in the Eastern Cape, said executive director of strategy Rob Wesselo.

He said the group would be looking for more opportunities in the region over the next few years.

Bellingham and Van Rensburg commended the Nelson Mandela Bay Municipality for their support during the entire process.

“The goodwill they showed towards us and this development was simply amazing,” he said. “They immediately recognised the value and importance of such a development for PE and the Eastern Cape and left no stone unturned in helping us see the project through to fruition,” said Bellingham.

“The entire process from acquiring the land to the zoning, subdivision, various other approvals and eventual sale went smoothly.”

Jansen van Rensburg forecast that the sale and subsequent developing of the Greenbushes Industrial Park would have a huge impact on other industrial developments in the area. “I believe we will see prices go through the roof as investors squabble over the available opportunities.”

He also said that the spin-offs would be felt right through to the residential market as industrial workforces looked to set up home as close as possible to their places of work. “New suburbs like Parsonsvlei adjacent to Bridgemead are already mushrooming,” he said.

“Our residential arm, Chadé Properties, have recently developed 800 stands in the first phase there (Parsonsvlei), all of which have been sold. We currently have another 3 200 units in the design phase.” 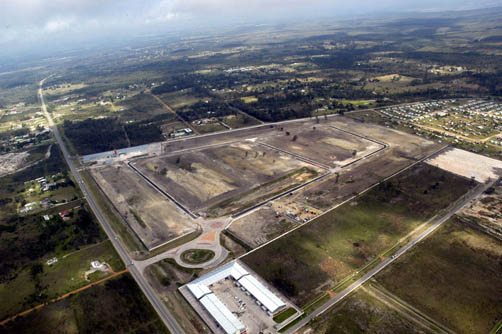 An aerial view of the secure Greenbushes Industrial Park development in Port Elizabeth that has been bought by the Pangbourne property group.