A further 200 people who cannot afford assistive devices will receive the gift of mobility following this October’s Wheelchair Wednesday initiative.

The 11th annual campaign was launched in Gqeberha in the Eastern Cape yesterday with the objective of adding to the 1 600 wheelchairs it has already funded over the years.

Its secondary goal is to raise awareness among corporates in Nelson Mandela Bay, Kirkwood and East London as to the importance of catering for their mobility-impaired clientele.

What started out as a wheelchair project by the Association for Persons with Disabilities (APD) has evolved to support the work of the Amputee Support Group (ASG) and Nkosinathi Foundation for the visually impaired.

It is estimated that around 100 000 people in the metro live with disabilities, highlighting the importance of corporate support from a company such as SPAR Eastern Cape, who has backed Wheelchair Wednesday since its second edition.

At the opening ceremony, the family retailer’s sponsorships and events manager Alan Stapleton said it was important to widen the scope of the project to serve more people.

He told the able-bodied volunteers that would spend the morning in a wheelchair performing predetermined tasks that the exercise would alter their outlook on life.

“When you wake up tomorrow morning you will be a changed person because what you will do today can be scary,” said Stapleton, who has in the past spent four hours in a wheelchair ticking off a range of tasks with questionable success. 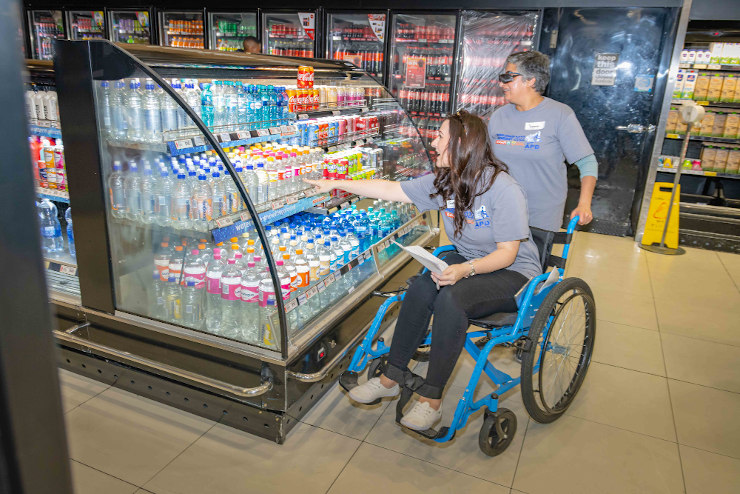 Several volunteers discovered the challenges faced by people in wheelchairs when they undertook various tasks as part of the annual SPAR Eastern Cape Wheelchair Wednesday campaign in Gqeberha this week. Run by the Association for Persons with Physical Disabilities NMB, the initiative promotes awareness of the importance of shops and businesses to be user-friendly to those with special needs. Photo: Leon Hugo

He explained that the little things people took for granted tended to become huge obstacles.

“We appreciate the time you have given us and have no doubt that the wheelchair you will help to donate will relieve somebody who, right now, is sitting in a room unable to move or get around.

“You will be giving them a huge amount of freedom.”

Wheelchair Wednesday traditionally takes place every Wednesday in October when business owners and other volunteers meet at a SPAR store to experience the difficulties of being bound to a wheelchair first-hand.

And, to illustrate the challenges of the visually-impaired, the wheelchair “pushers” don special eyewear to compromise their vision while assisting those bound to wheelchairs in performing their tasks.

Stapleton acknowledged the work done by the APD.

“They are angels. This is one of those partnerships that has crept into our hearts.

“It ties in with our desire to be involved with our communities as well as to link up with businesses to support the disabled.”

He said the retailer was always looking at ways to expand the reach of the initiative and, as a result, the Kirkwood community had been included for the first time last year while East London was part of the current campaign.

“Besides that, we also welcomed aboard ASG and Nkosinathi, both of which are integral to this project.”

The ASG, under Brian Paddey, assists amputees through counselling and distribution of assistive devices.

During the campaign the public can place unwanted crutches, prosthetics or walking sticks in crates at participating stores. Readers, magnifiers and old spectacles can also be donated.

APD chief executive Cecilia Fourie said the organisation that had been established in 1940 as a shelter for the disabled was now a garment manufacturer competing in the open market and employing 45 people.

Around 2 600 people had participated in Wheelchair Wednesday since its inception, she added.

“This provides a great opportunity to highlight accessibility and disability issues in our region.”