Kariega businessman Lenro Stoltz is poised to take his auto repairs company to the next level after entering into a landmark merger with the Eastern Cape-based Kelston Motor Group.

What started out as Prestige Auto Body Repairers under Stoltz and his late father in 1991, officially became Kelston Motor Body Repairers on October 1 this year.

While Stoltz continues to steer the repairs side of the business, the group will drive its long-term future and expansion.

The new direction was inevitable once Stoltz and Kelston managing director Mike McNaughton started discussing the value of pooling their assets to enhance their respective service offerings.

“It took many months, if not a few years,” explained Stoltz. “Sometimes it was not quite the right time for them and other times for me.”

He said Kelston’s financial muscle would allow him to fast-track his vision for the erstwhile family business.

“It is not always easy, or even possible, to implement new ideas when you are one person. Everything takes longer when you have to finance and execute it yourself.

“With the right backing, the risks are shared and everything can move forward much faster. For me, this was an important factor in signing off on the deal.” 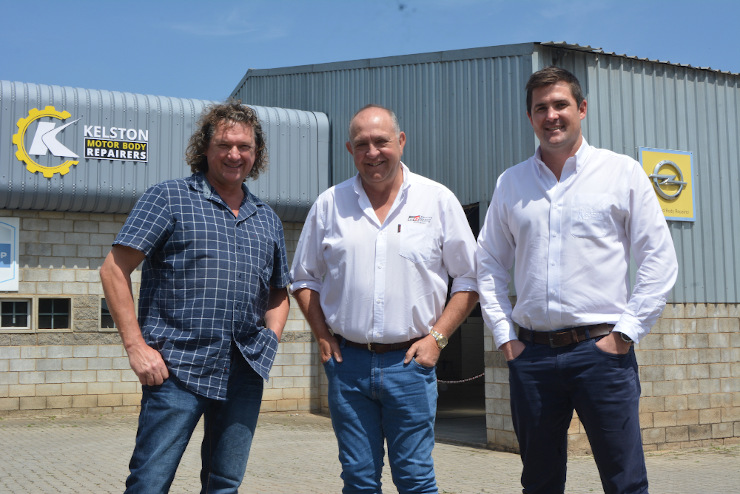 Kelston Motor Group has 21 dealerships offering 13 vehicle brands across the Eastern Cape, including in major centres such as Gqeberha, East London, Graaff-Reinet and Queenstown. It also has close ties with the agricultural and transport sectors in the country and rural areas.

“I have worked on many cars from Mike’s dealerships and we started discussing the possibility of joining forces some time back,” explained Stoltz. “Things slowly evolved from there.

“As we started getting more serious about a merger, both parties started sharing ideas and we soon realised that this was the way forward. It was decided that they would have the majority share in the new company.”

Stoltz, who has known McNaughton for most of his stint in the industry, believed the new direction had significant benefits for both parties as it combined Prestige’s expertise and reputation in repairs with the management and investment clout of Kelston.

He believed that there was huge potential for growth and that the opportunity had been equally attractive to Kelston as it gave the company access to fast, quality repairs for its fleet of vehicles.

“They have shown massive growth over the last couple of years and this will equate into significant business for ‘our side’ of the business.”

Along with the group came a management division with expertise in just about every field, including marketing, said Stoltz.

“We run the workshop and repairs as it is vital that we maintain the reputation that we’ve earned over more than 30 years.”

Stoltz cut his teeth in his father’s repair shop after school when they still lived in Gqeberha and has been immersed in the auto business ever since.

“Prestige was born when we moved to Uitenhage in the early nineties and it’s something I’m hugely passionate about.

“That is why I have been motivated and driven to put in the hours all these years – not being successful is not an option when you are responsible for the livelihood of so many families.”

The younger Stoltz evidently has a nose for the repair business – literally and figuratively.

“I absolutely love walking into the shop after the Christmas holidays and taking in the aroma of the spray paint.”

With the industry ever evolving, it had been a rollercoaster ride to stay up to speed over such a long period, he admitted.

“Fortunately, I was welcomed by the Uitenhage community from the outset and that has been extremely important for our business.”