Tyler Nevin of Gqeberha and the Rhodes A team emerged with the major accolades from the Madibaz Chess Festival held at Nelson Mandela University this weekend.

The tournament was divided into classical chess, blitz and rapid team events.

Madibaz coach and tournament director Tinus Goosen said the festival drew 89 participants between the ages of eight and 65.

The open competition, played over three days, was the main event and games lasted between two and four hours each.

“It was a tough event with many upsets during the five rounds,” said Goosen.”

The youngest player in this section, Samuel Driscoll, beat fifth seed Brett Dakin in a long game in the opening round.

“To make the event more accessible, we broadcast the top two boards of each round to the public and broader chess community,” explained Goosen. 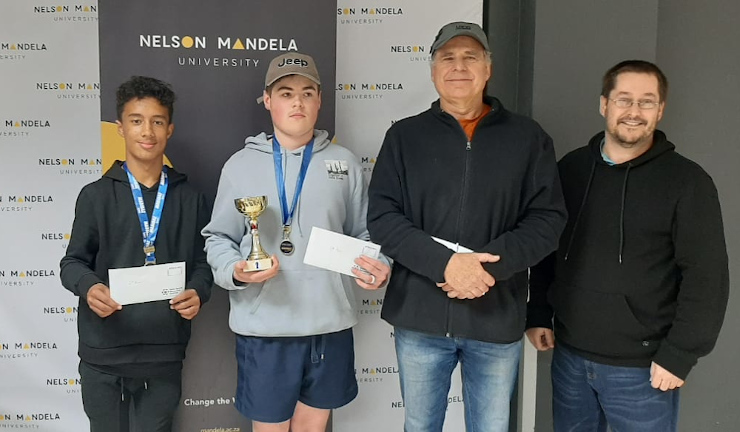 The top three players in the open section of the Madibaz Chess Festival at Nelson Mandela University this weekend were, from left, Ismael Lagardien (third), Tyler Nevin (first) and Ewan Kromhout (second). With them is tournament director Tinus Goosen. Photo: Supplied

In the team event, Rhodes A won the open section, followed by Madibaz A and Madibaz B respectively.

“The team category was very competitive,” said Goosen. “Rhodes University brought their strongest team and in the end it showed as they beat us in the last round.”

In the primary section of the team event, PECC Knights beat Rowallan Park and Checkmates.

Goosen described the blitz category as “the real fun part”.

The open tournament was won by Jaco Serfontein (6/7) while Garen Twigg came first in the primary section.

The tournament forms part of the local chess calendar, with Madibaz hosting their next competition from October 7 to 8.

It is sponsored by the physics department at Nelson Mandela University and is open to everyone.

Before that, the Eastern Cape provincial tournament will take place on October 1 and 2.

Goosen said the Madibaz Chess Festival helped to raise funds for the team to compete at the University Sport South Africa tournament in Kimberley in December.