Kelston Motor Group has continued its journey of investment in the Eastern Cape economy with the establishment of a Chery dealership in Komani.

The operation opened on August 1 at 4 Woodfield Street to bring the group’s number of dealerships to 21 across the Eastern Province and Border regions.

Group operations director Peter McNaughton said the latest expansion was in line with the company’s vision to support the local economy.

“We made a conscious decision some time ago to focus the company’s growth in the Eastern Cape. This region is our home and we believe it is important to invest, grow and build within the province.”

He said it would be the sixth brand represented by Kelston in Komani and that the group had made substantial investments at all of these sites, which indicated its long-term belief in the town and its economy.

“This region faces the same challenges as many others in the country but it is represented by a number of energetic, positive and passionate businesspeople and entrepreneurs. We feel privileged to be part of that.”

McNaughton added that they were confident of achieving their goals after establishing successful Chery operations in Gqeberha and East London.

“We believe the brand will provide an excellent alternative for our customers in Komani. We have a solid base here as a group and believe we can support the brand in growing to its full potential.” 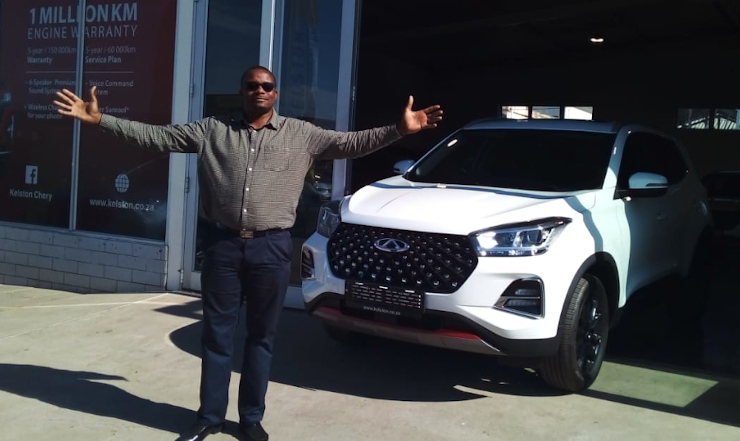 Kelston Motor Group has made another sizeable investment in the Eastern Cape economy with the establishment of a Chery dealership in Komani. Sales manager Tunga Mushakwe will oversee the operation. Photo: Supplied

McNaughton, who oversees the group’s dealerships in the passenger, light commercial and luxury vehicle markets across the Eastern Cape, said the company felt the brand was well-suited to the area.

“As an SUV product it fits the lifestyle of the customer in Komani and surrounds,” he said. “In addition, the 10-year or one-million-kilometre engine warranty is a major selling point.

“The range carries a standard service plan of five years or 60 000km, which can be upgraded to a maintenance plan for a nominal fee. In addition, the vehicle bodies are fully galvanised and have a standard manufacture warranty of five years or 150 000km.”

“Its technology, safety and performance are things one can only truly experience by spending time in the vehicle and I encourage the public to visit Tunga Mushakwe and his team at Kelston Chery Komani.”

He added that Chery had sold 1 262 units in South Africa in July, placing it eighth in terms of passenger volume.

“That’s not bad for a brand which has been operational for less than a year with only three models, with more launches to come.”

He believed Mushakwe, the sales manager, was ideally qualified to run the dealership.

“Tunga recently spent some time with us in Gqeberha learning the various systems and I could see his excitement for the brand build the more time he spent with the team and the vehicles.

“He is a Komani local and has run a business in the town after being involved with Kelston on another brand. He has a great understanding of the local market and I am glad we were able to join hands with him in this venture.”

McNaughton said the dealership would have access to all used vehicles within the Kelston Motor Group, which was in excess of 400 units.

“Even though these are not on the floor, technology makes it possible for customers to have all the necessary information to make their decisions. The unit is then shipped to the dealership by our own fleet of car carriers for final inspection.”