Gqeberha sprinters Shirley Nekhubui and Luxolo Adams have been named in the South African team to compete in the Commonwealth Games in Birmingham, England, from July 28 to August 8.

Nekhubui will compete in the 4x400m relay while Adams has been chosen for the 200m and 4x100m relay events. Both are members of the Madibaz Athletics Club.

Twenty-one-year-old Nekhubui made an impact on SA sprinting earlier this year when she set a record of 16.96 seconds in winning the 150m race at the Newton Classic in Johannesburg.

Now she looks forward to taking her running to the next level as she excitedly anticipates her first appearance at one of athletics’ major international meetings.

“I’m overwhelmed with joy at my selection for the national team,” said Nekhubui. “The prospect of making further progress in my career is a blessing and I’m keen to make the most of this opportunity.”

Since her record-breaking run in February, the Madibaz sprinter has been competing in various meetings around the country.

“I participated in the ASA Grand Prix in Bloemfontein where I came third in the 400m,” said Nekhubui. “The 400m is not my preferred distance so I was very happy with the result.”

She won the 200m at the Grand Prix meeting in Potchefstroom and finished just off the podium at the national championships in Cape Town in the same number. 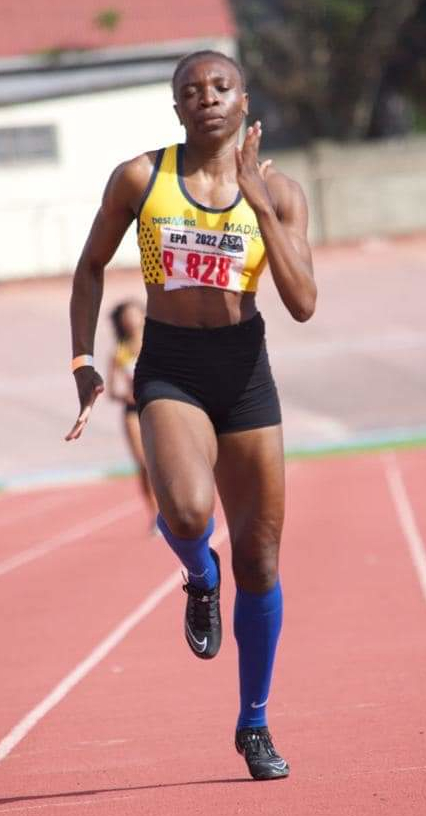 Madibaz sprinters Shirley Nekhubui and Luxolo Adams have been included in the South African squad for the Commonwealth Games in Birmingham, England, from July 28 to August 8. Photo: Supplied

“I did not do as well in the final at SAs as I had hoped, coming fourth.

“Based on how my training unfolded, I was just not able to respond the way I expected. I was a bit anxious as this was a major event in my career.

“But each race is an experience that equips me with the ability to navigate similar situations in the future.”

Nekhubui, who was born in Tswera Mashishi in Limpopo, also participated in World Athletics Continental Tour events in Botswana and Kenya.

“It has been a very busy season but I would say the highlight was when I was selected for the African champs in Mauritius for the 200m and 4x400m relay.

“I managed to qualify for the finals but, unfortunately, did not make it to the podium.”

Being selected for the Commonwealth team is the “the icing on the cake”, she admitted.

“I’m focused on giving it my best and to enjoy being part of the national team. I’m proud to be flying the South African flag high.”