Race is on for honours in PE Coastal hockey tournament

A line-up of seven teams will be eager to follow in the footsteps of DSG when the second tournament of the SPAR Eastern Cape Schoolgirls Hockey Challenge takes place at Woodridge, just outside Gqeberha, on Sunday.

The popular event is back on track this year after two years of disruption by the Covid-19 pandemic and the participating teams will be fired up to show what they can do.

The PE Coastal leg is one of five tournaments which take place annually in the Eastern and Southern Cape, with the grand finale deciding the year’s provincial champions.

Matches are played over a shorter period than normal, which means the players and coaches are constantly under pressure to deliver.

The opening competition was held in Makhanda on Sunday, where DSG narrowly defeated Kingswood 1-0 in a well-contested final to qualify for the provincial finals in Gqeberha in August.

Now, headed by defending champions Collegiate, the PE Coastal teams are primed to make a statement, with their competitors being Woodridge, Alexander Road, Victoria Park, Westering, Pearson and Framesby.

The PE Coastal leg did take place last year, with Collegiate defeating Pearson 4-0 in May, but the lockdown soon afterwards put paid to any further tournaments and the whole competition ground to a halt.

Tournament director Matt Blair said it had been extremely exciting to return to action in Makhanda and that he was looking forward to another keenly contested leg at Woodridge. 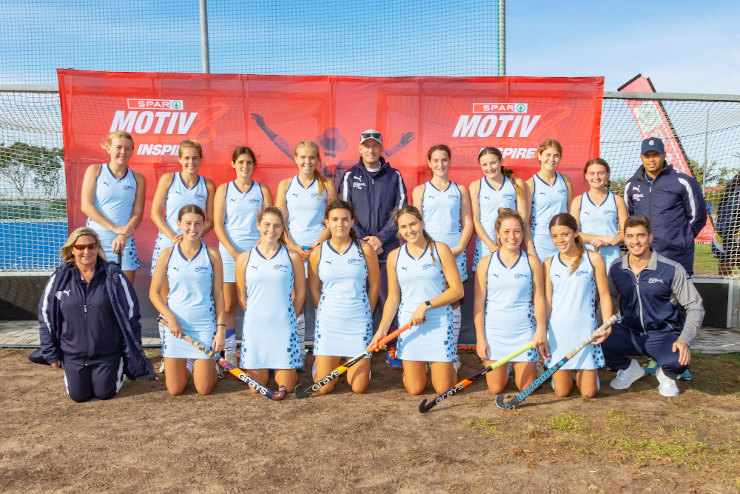 Collegiate won the PE Coastal leg in the SPAR Eastern Cape Schoolgirls Hockey Challenge last year, but did not play in the provincial finals as the tournament was cancelled because of Covid soon afterwards. They will be out to defend their title at Woodridge on Sunday. Photo: Leon Hugo

“Everything went off extremely well and it underlined what an important part of schools hockey this challenge is,” he said.

“It is a fantastic opportunity for all local teams to be able to compete against each other in a healthy environment.

“I believe it plays a huge role in helping schools prepare for their busy hockey seasons.”

He added that it was the ideal platform for schools to display the talent they had, as well as providing an opportunity for teams who don’t normally play each other to interact.

“It goes further than just playing hockey, because there’s a chance to meet different players and to create a bond off the field as well,” said Blair.

The field for Sunday includes a number of teams who have excelled in past tournaments.

In 2016, Collegiate went on to be crowned provincial champions, while Woodridge were the overall winners in 2019.

Following Sunday’s tournament there will be a break until the next leg takes place in George on May 7.

This will be followed by the EL Coastal leg in East London on May 15 and the EL Inland leg in Queenstown on May 22.