The much-needed rain in the Nelson Mandela Bay region did nothing to dampen the spirits of the teams that competed in the SPAR Eastern Cape Schoolgirls Hockey Challenge at Woodridge yesterday.

When the final drop fell in the PE Coastal leg, it was defending champions Collegiate that emerged as the winners in the narrowest of fashions against Gqeberha rivals Pearson.

Last year, Collegiate never received the chance to play in the provincial finals as the Covid-19 pandemic scuppered any chance of the competition being completed.

It was their second successive final against Pearson but, unlike last year’s 4-0 win, it went down to the wire, with the winners edging through in a penalty shootout.

The 25 minutes of regulation time were fiercely contested. Collegiate enjoyed territorial advantage, but both sides had their chances, only to flounder on the defensive wall they faced at each end.

Even in the shootout, there was little to choose between the teams.

The first penalty was converted, but from there on the goalkeepers stood firm and when five players from each side had taken their shots, it remained 1-0 to Collegiate.

Thrilled that the Hockey Challenge was back on track around the country, SPAR EC sponsorships and events manager Alan Stapleton congratulated the girls on their high-quality play. 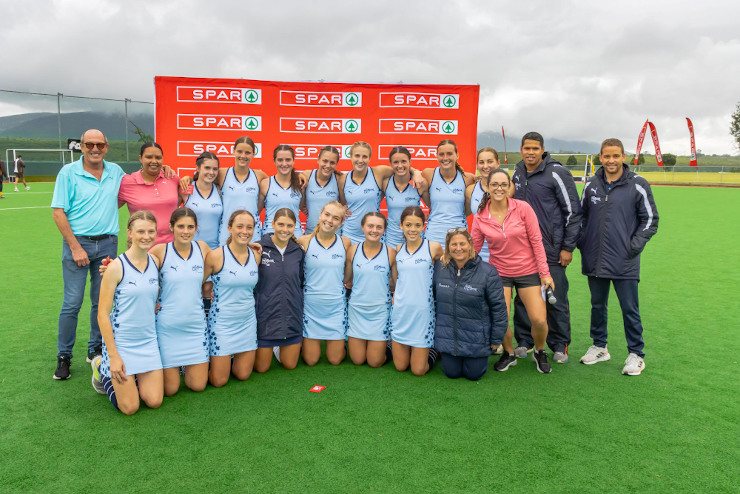 He also reminded them of things he deemed an essential part of the day.

“More important than the competition was the spirit in which you played the game and the friendships that have come out of today,” said Stapleton.

“Those are the sorts of friendships that last a lifetime and in 20 to 30 years I know you will look back on the friends you made today. If we can be the catalyst for that, well that’s even better for us.

“Thanks to everyone who braved the weather because we really do appreciate you being with us. After two years, it’s wonderful to have the SPAR Schoolgirls Hockey Challenge going again.

“You should just know that from a SPAR point of view women and sport are important and hockey is very much part of that.

“It was great to be able to support the EP indoor side that went away recently and, to you guys, this Hockey Challenge is a big priority for us.”

The winners will join Makhanda’s DSG in the provincial finals in Gqeberha in August, but there were also others to celebrate on the day.

The officials were acknowledged when Brooke Kruger received the prize for the most promising umpire, while St Thomas goalkeeper Danah Brown was given a prize for showing great spirit, especially in a magical moment when she blocked two goals in quick succession.