SPAR Madibaz coach Lana Krige is chasing constant improvement from her young team as they look ahead to the closing stages of the Varsity Netball tournament in Stellenbosch this weekend.

With two wins from five matches, the Nelson Mandela University side have collected nine points and will be looking to move up the table in the final two games of round-robin competition after today’s rest day.

They opened with a notable 54-41 win over University of Western Cape on Saturday and also defeated Tshwane University of Technology 45-24 on Tuesday.

After the Covid-19 pandemic saw last year’s tournament cancelled, Krige has a youthful squad at her disposal and said it was a matter of “keeping our heads level under the pressure of competition”.

“The lessons learnt so far are that if we do what we need to do as much as we can our games will always be a success,” she said. “But when we play to get rid of the ball or become impatient or anxious, that is when the basics fall away.

“So it is really just a matter of keeping our composure and every game we play we are striving to make sure there are more minutes in which we are keeping our heads level and playing the way we want to play.”

Krige added she was pleased with the results, but that they looked at the statistics after each game and identified areas where they could do better in the next fixture.

One of the best performances, she felt, came in their opening game against UWC. 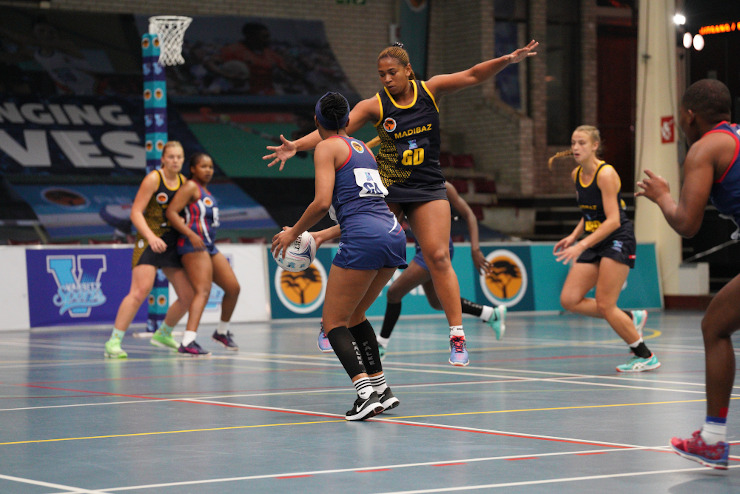 SPAR Madibaz player Noluthando Maliehe jumps in defence during their clash with Tshwane University of Technology in Stellenbosch on Tuesday. Photo: ASEM Engage

“That was a great win, because I was a bit worried about the challenge we faced. UWC’s systems are working well and they have recruited some very good players, so that was an excellent start for us.”

The second victory against the Tshwane outfit did not reach the same standard, but Krige was still pleased with the final outcome.

“Perhaps it wasn’t their best performance, especially in the last three quarters, but the way the girls handled the physicality on court shows that mentally they are adapting to the tough challenges of Varsity Netball.”

She felt that effort was an improvement after what she called some disappointing play against the tough UP-Tuks outfit.

“We had two great quarters, but then there were also times when we just didn’t believe in ourselves. I know it is a young team, with some players not having even competed at first team schools’ level, and they have been working really hard.

“But against Tuks I think they were just a bit overwhelmed by the aura of the competition and therefore didn’t believe in our systems and did not play as well as they can.

“I understand, however, that we are in a learning curve, not only for this tournament, but also for competitions lying ahead of us.”

Madibaz complete their league programme against University of Johannesburg and North-West University tomorrow and Saturday.