FNB Madibaz rugby captain Luyolo Dapula says they will continue the fight to land that elusive win after an agonising loss against Free State University in the Varsity Cup at the weekend.

The Nelson Mandela University outfit, back in the competition’s top flight for the first time since 2018, went down 24-20 to a try by Shimlas which came after the final hooter had sounded.

It has left them at the bottom of the log but Dapula, who was named the Player that Rocks, said they were not disheartened despite the position.

“There were a lot of positives that we can take from the game against Shimlas,” said the skipper.

“I must admit, we all wanted to achieve the win so there is disappointment in the squad but I am satisfied that we gave it all we could out there on the field.”

Dapula said they would continue to fight.

“It is not about how you start but about how you finish, so we will be staying in the fight right until the end. We are determined to find that win as many people have seen there is a lot of courage in the boys.”

He said the match against Shimlas had a personal resonance for him. 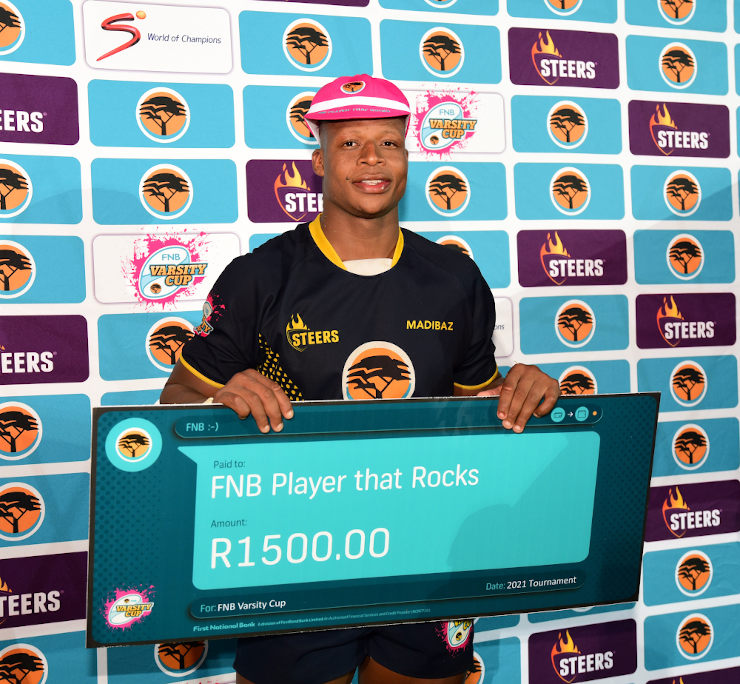 FNB Madibaz rugby captain Luyolo Dapula was voted the Player that Rocks in their Varsity Cup match against Shimlas at the weekend. Photo: Brendan Croft/Varsity Sports

“I played my rugby in that region when I turned out for the Cheetahs XV in 2019 so I came across many familiar faces in the Shimlas team, and that made me want to perform well.

“Getting the individual recognition means a lot, but it was done on behalf of the team and without the support of the players I would never have achieved that.”

In a squad of young players, Dapula felt it was important for him, as one of the senior members, to lead the way.

“In a relatively inexperienced side I believe it’s essential to try to set an example,” he said.

“We have shown that as a squad we can be competitive at this level. It’s just about being more clinical in finishing things off when we create opportunities.”