Chess star making all the right moves ahead of online Olympiad

Madibaz student Charlize van Zyl will use the time left ahead of South Africa’s entry into the Online Chess Olympiad to fine-tune her preparations for the competition in August.

This tournament has been set up after the actual Chess Olympiad, scheduled for Russia next month, was postponed to 2021 because of the coronavirus pandemic.

Earlier this year Van Zyl was chosen for the South African team after she excelled in a qualification tournament where she won the women’s section by two points without suffering any losses.

Although the disruption caused by the pandemic has created some frustration, the 20-year-old said she was looking forward to the challenge when SA joins the competition on August 20.

“This online format is very different, but I really enjoy it,” she said. “We will be playing on our laptops or desktops on the biggest online chess-playing platform – Chess.com.

“We will be closely monitored through webcams and microphones, so although it is different to live chess as you are not directly facing your opponent, which in itself is a huge psychological factor, your every movement is still being watched.

“Other than that, it is a lot more comfortable than live competition or over-the-board chess as you can play from the comfort of your own home with no distractions caused by other players.”

The third-year BA student said one of the chief differences was the time allowed in which players had to make their moves. 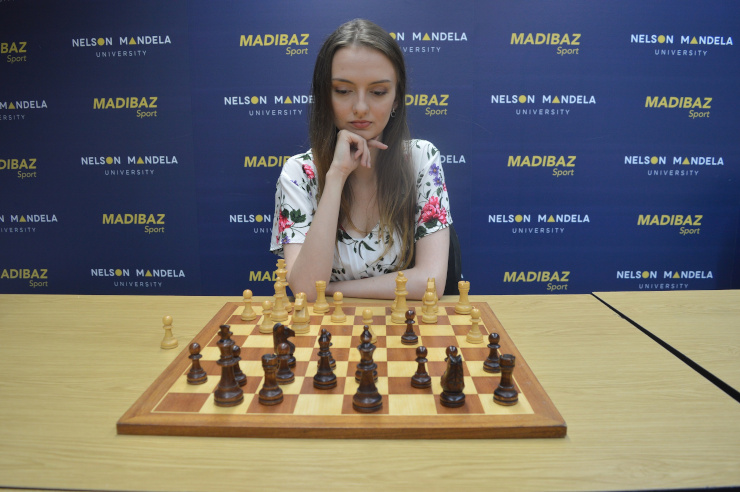 “The time control will be quite different. For the normal Olympiad and most prestigious over-the-board tournaments, the time control allows games to stretch on for hours.

“But in this competition we will have 15 minutes, plus five seconds. This means that both you and your opponent will start with 15 minutes and get an additional five seconds added to your clock for every move that you make.

“It means that games will not exceed an hour.”

She said her preparations would focus mostly on playing many games in this time format to get used to it.

The online competition is divided into different sections and has already started with the base division (5). There are a further three divisions (4 to 2) for which teams from the lower sections will be able to qualify as the tournament progresses.

The top 15 teams from division two will join the 25 teams who have already been placed in the top division, which includes South Africa.

“Happily, being in the top division, we don’t have to follow this long play-off system in the next month,” said Van Zyl.

“Each team is made up of six boards with two male players, two female players and two U20 male and female players. Each board has a reserve player, so in total we are 12 players.

“It is going to be tough as we are already placed in the same division as strong chess countries such as Russia, China and the USA.

“But we still have some time to prepare and I am looking forward to testing myself against some of the best chess players in the world!”