There was some of the old and some of the new as competitors braved breezy conditions during the annual SPAR Charity Golf Day at Humewood on Thursday.

The old was the penguin theme of the day to highlight the plight of coastal birds in the region, which are monitored by Sanccob (Southern African Foundation for the Conservation of Coastal Birds), one of the day’s beneficiaries.

The new involved a beneficiary in the shape of Wilderness Foundation Africa, with specific reference to their Youth Development Programme, while the golfing aspect of the day was also broadened.

A suggestion from SPAR EC managing director Angelo Swartz saw a group of golfers who are not regular players undergoing an introduction to the game from the club pros at Humewood.

Sponsorships and events manager Alan Stapleton described this as one of the highlights of the day. 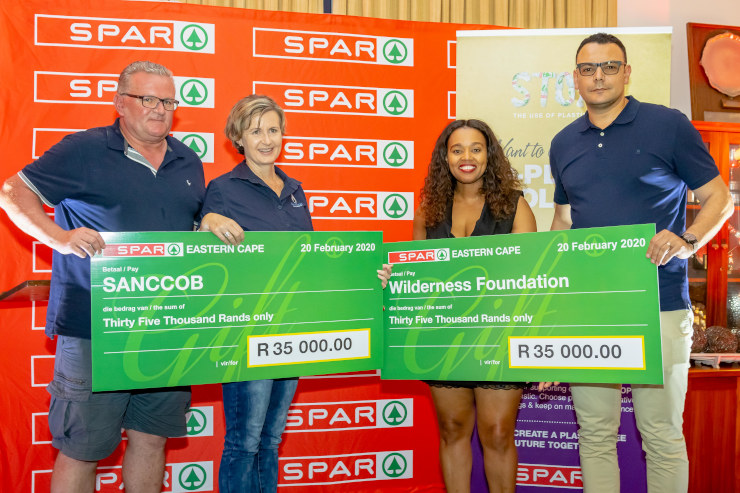 “From the 17th hole I could hear what fun you were having,” he quipped.

“For too long, the golf day has been exclusive and this was a brilliant idea from Angelo to include some new people in the game.

“So today is the start of something really special and it’s something we want to grow going forward.

“It was all about fun and it really is so great to have you joining us at our prize-giving.”

In alluding to the wind that howled around the course at close to 50km/h, Stapleton said it was in times like these “where we need to stand together”.

“There have been some tough times economically, where we have to stand together, and it is the same on the golf course on days like this.

“I believe that is the beauty of golf, where you can take four people and put them together for a day of networking and just having some fun. Even in difficult conditions like this you can go out and have a beautiful day.”

The main objective of the golf day, he added, was to support organisations which made a difference in society.

To this effect, donations of R35 000 each were handed by Swartz and marketing manager Abri Swart to the two beneficiaries.

“One is an old friend and one is a new friend,” said Stapleton, “and they do amazing things to help our wildlife and our community.”

Sanccob centre director Margot Collett said they were privileged to again be part of the Charity Golf Day.

“We rely hugely on public support and our gratitude goes to SPAR Eastern Cape for partnering with us and also to all of you golfers.

“You all contribute by purchasing at SPAR and supporting days like this, and that feeds into the work that we do.

“Our main focus is to rescue and rehabilitate coastal birds and release them back into the wild, with a lot of focus in our region on penguins.”

Pinky Kondlo, the director of the Youth Development Programme at Wilderness Foundation Africa, said they were honoured to be part of the day.

“We are one of the few NGOs in the conservation space which have equal focus on our natural environment and socio-economic development,” she said.

“We use our link with wildlife to educate young people from disadvantaged areas and to give them a chance to develop to a level where they can find jobs.

“I must say a huge thank-you to SPAR Eastern Cape for the opportunity they have given us.

“For example, SPAR employed 80 people from our programme in December and that is the sort of thing which gives hope and opportunities to our young people.

“Without that they would not have had anything to put on the table at Christmas, so we are indebted to SPAR for this donation to continue the youth work we are doing.”