Fabbri and co ready for a blast at Women’s Challenge

Port Elizabeth comedian Gino Fabbri – and his alter ego Clyde Smithers – will be at their zany best when they whip up enthusiasm at the SPAR Women’s Challenge races in PE next month.

The popular roadrunning event, taking place on March 21, offers distances of 10km and 5km and perennially draws thousands of women to the race village in Summerstrand, adjacent to Pollok beach.

For a decade, Fabbri has been doing his thing as the chief entertainer at the start of the race and he says this year will be no different when it comes to creating a fun and festive vibe before the gun goes off.

“Basically I try to put maximum energy into the start of the race,” he said. “I like to get there early and I usually develop a character to add to the fun.

“This year I’m using my jogging guy – Clyde Smithers – and you can spell that any way you want to, perhaps Clarde!

“He’s going to be helping the runners get their energy up at the start to get them going for the race.” 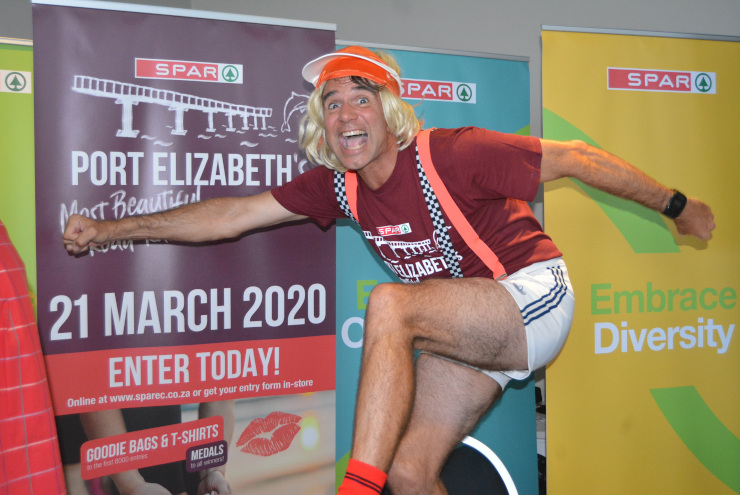 Comedian Gino Fabbri, and his alter ego Clyde Smithers, are ready to have a blast when they entertain the thousands of runners at the SPAR Women’s Challenge in Port Elizabeth on March 21. Photo: Full Stop Communications

Fabbri’s modus operandi is to belt out popular songs with a catchy tune, encouraging all runners to sing along with him.

“This year we have put excerpts of a whole lot of songs together in a 10-minute medley,” he added.

But it’s not just about singing from his platform above the start line. Fabbri, or Clyde, will be mixing with the runners in dance routines to warm them up.

“We will be on the line before the start and get everyone to jump around and have some fun,” he said. “There’s nothing better to get those muscles warm than a couple of exercises through dances such as the Macarena.

“And the feedback we’ve had has been fantastic. Even the elite runners join in the fun and that’s what it is all about – having some fun.

“I know the 10km runners are a bit more serious, but they also enjoy it, while the 5km entrants are there for the jorl, so that is always a blast.”

No mean runner himself, Fabbri says he will charge through the 5km field once they have set off.

“Clyde is just going to go as fast as he can to encourage all the ladies. My advice is to run as fast as you can without falling over.

“We really love being part of this day. It’s fantastic fun and the energy the ladies give off is wonderful – they really get into it and it’s a chance to let your hair down and enjoy some exercise at the same time.”

Once the races are done, the atmosphere will change from Fabbri’s hectic antics to the popular tune of Eastern Cape band ChapterTHREE.

This three-member vocal group were established at the beginning of 2008 and they have performed at a variety of events.

“We are delighted to have a local band there to entertain us,” said SPAR EC sponsorship and events manager Alan Stapleton.

“They cover songs from a wide range of eras and genres, including hits of the ’70s to chart-busting singles of the modern era.

“Their performances have been described as entertaining, explosive, inspiring, touching and heartfelt.

“It is this versatility that has seen ChapterTHREE becoming one of the Eastern Cape’s most sought-after entertainers in a short space of time.”

Stapleton added that there would be various activations on the run, while competitors could look forward to a heap of lucky-draw prizes.

“The high point of this will be one runner walking away with a year’s supply of groceries,” he said.