The University of Johannesburg team will be looking to build on an impressive performance in the Varsity Cricket tournament where they ended runners-up at the weekend.

Despite losing to UP-Tuks in an abbreviated final in Potchefstroom on Saturday, coach Dumisa Makalima said he was proud of what the squad had achieved.

The final developed into a frustrating affair for UJ after a power failure resulted in a two-hour delay during their innings.

In the end, the innings was reduced to eight overs, in which the Johannesburg side made 60/7, a reasonable recovery after they had been reduced to 19/5.

UP-Tuks were able to reach their target for the loss of two wickets.

Nevertheless, Makalima was encouraged by his squad’s performance in qualifying for the final. Their week was made a bit more complicated after captain Muhammed Mayet was injured in an accident and unable to play again in the tournament.

“There are absolutely some positives which we can take from the tournament,” the coach said.

“We had a mixture of senior players and youngsters, with quite a few of them making their debuts in this tournament.

“But the team has built up well over the last six months and they have become a united outfit. The boys play for each other and that’s very exciting going forward.”

He added that it was also important to recruit smartly to complement the talent already in the squad.

“We want to make sure we have good balance in the squad and I am confident this team will go from strength to strength.”

Makalima said their extensive preparations for the Varsity Cricket tournament had put them in a good frame of mind for the week. 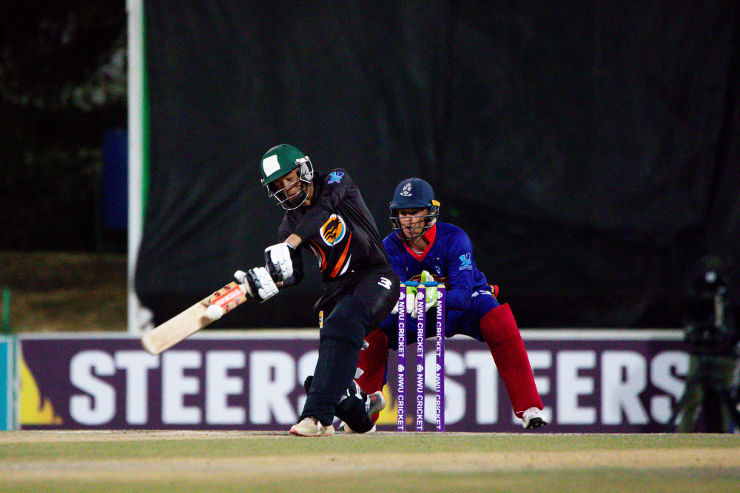 University of Johannesburg’s Glen Adams hits out during the Varsity Cricket final against UP-Tuks in Potchefstroom on Saturday. Photo: Barco Greeff

“I was confident we could reach the final because a lot of thought went into our build-up to the week and we looked at all the different combinations.

“One of our main successes was the batting of our openers Joshua Richards and Delano Potgieter, who often gave us good starts.

“Unfortunately they didn’t click in the final, but that’s the way it can turn out with Twenty20 cricket.”

After a good start to their programme, Makalima said they lost a bit of momentum during the week.

“We sat down and decided to simplify the game and play good basic cricket.

“We focused on rotating the strike and trying to reach a run-rate of eight an over when it came to the power plays.

“Chad Classen had a good week with the ball and we had a nice mix in our bowling combinations, made up of fast bowlers and spinners.”