The Madibaz karate team returned from the University Sport South Africa tournament with the gold medal, thrilled at finishing on top of the podium for the second year in a row.

The week took place in Grahamstown at the end of June and sensei Gcobani Maxama said the triumph was just reward for all the hard work they had put in.

The Nelson Mandela University team generally fare well at the event and Maxama said that successfully defending their title was a wonderful outcome.

“The competition was stiff but we had put in a lot of work so it’s a great feeling,” he said.

“Even though we have won before it remains a high and something you never quite get used to. The more one wins, the more you want to win – it gets addictive.”

Maxama was one of the key Madibaz performers as they overcame Eastern Cape rivals Walter Sisulu University and Durban University of Technology for the title.

“But to be fair, all the team members pulled their weight,” said Maxama. “First-time fighters such as Asiphe Manzi and Dimpho Sethathi both came back with two medals respectively.”

Madibaz finished five points ahead of Walter Sisulu, who pushed them all the way.

“They have been long-time rivals and this year was no different,” he added.

“Durban University of Technology are a new threat and they came third. They are a team we will have to be on the lookout for going forward.”

Maxama attributed their success to the preparations they underwent ahead of the week in Grahamstown.

“We all had one goal and we knew what needed to be done to achieve it,” he said. “We also understood that every institution would be gunning for us due to our record at the tournament.

“As part of our build-up we had former club students and coaches give us inspirational talks to make us realise the task which lay ahead.”

He said he hoped that by flying the Madibaz flag high it would benefit the varsity club to ensure they would be able to continue to compete at a high level.

At the end of the week, Booi was selected to represent the USSA team to compete in a tournament in Zimbabwe.

“Sensei Gcobani needs to be commended on the great effort he puts in to prepare the karatekas,” he said.

“They basically train five days a week using various venues and, even when they don’t have access to their normal dojo, the student-athletes continue to show resilience and commitment.

“All of them must be congratulated for putting their bodies on the line. It was, indeed, a team effort, based on the meticulous planning of Gcobani.” 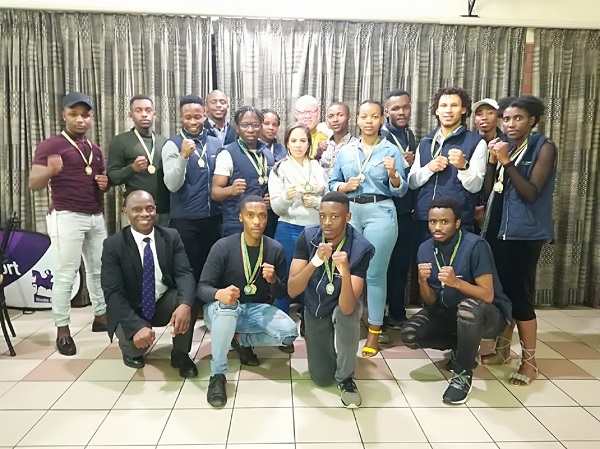 The Madibaz karate team retained their title in the University Sport South Africa tournament which was held in Grahamstown at the end of June. Photo: Supplied