The standard of competition is improving each year, so the Madibaz surfing team are eager to build on the experience they gained at the University Sport South Africa contest this month.

The competition was held in Victoria Bay near George from July 11 to 14 and the Nelson Mandela University squad ended third overall, with captain Greg Cuthbert qualifying for the men’s individual final.

He finished fourth in that contest, but said there were many positives they could take from the time at Vic Bay.

“I feel like our performance overall was incredible,” said the 22-year-old who grew up in Knysna but now lives in Summerstrand, Port Elizabeth. “In total we had eight new surfers in the team.

“For many of them it was their first time competing in a serious contest and every single one of them stepped up to the plate and gave it their all.

“I’m a very proud team captain and we’ll definitely build on this in preparation for next year.”

Cuthbert said there was no doubt that the level of competition at USSA was constantly improving.

“This is my third year surfing this contest and every year the standard of surfing has got higher.

“This year there were more than a handful of SA’s top-tier surfers, which pushed the level higher than I’ve seen in previous years. In short, the competition was tough.”

He added that surfing was about getting the right conditions and often competitors were at the mercy of mother nature.

“The conditions at Vic Bay this year were very tricky for the most part,” said Cuthbert.

“For instance, the first day of competition for the men started off relatively small and it was difficult to choose the right wave that would give you scoring potential.

“Throughout the day the waves slowly started getting bigger and the women’s first round kicked off in very challenging conditions.
“Day two consisted of some very big and wild conditions, while day three got a lot smaller with ideal conditions for most of it, which made for an incredible finals day.”

He added that they often faced quite different conditions in Port Elizabeth.

“I think getting used to waves of consequence is a big factor in calming the nerves and performing at your best and I think we’ll need to train in conditions like that for the future.

“Also, quite a few of our team members were surfing in a contest for the first time, which obviously creates some nerves. We should definitely try to hold more local contests.”

After what he described as an average year in terms of his personal results, Cuthbert said it was “an awesome feeling just to make the final”.

“I think that I surfed very well this time compared to last year,” he said. “I came into the contest with the mindset of having fun and giving it my all.

“At the beginning of the contest my game-plan was to get a good ride at the start of each heat, which I did, and then wait out the back for an even better wave to come through.

“Often the pressure of time makes you opt to go for an average wave, but I stuck to my plan throughout every heat and picked out the waves that had good scoring potential which led me on the path to the final.”

Cuthbert added that the final was fairly slow in terms of the number of waves that came through.

“The waves that did come through were probably the best of the contest, which I think was an incredible end to the week.

“It was a 25-minute final with four surfers having qualified. In terms of my performance I think I surfed my best heat in the final but ended up coming fourth.

“Surfing is a tough sport when you have to rely on mother nature to bring you a good wave and the other competitors managed to get the slightly better waves in the final, which gave them the edge.

“But I’m certainly stoked with the way I handled myself throughout the entire contest.”

The overall individual title went to Sean Joubert from Stellenbosch University, while UCT won the team title, with Stellenbosch second. 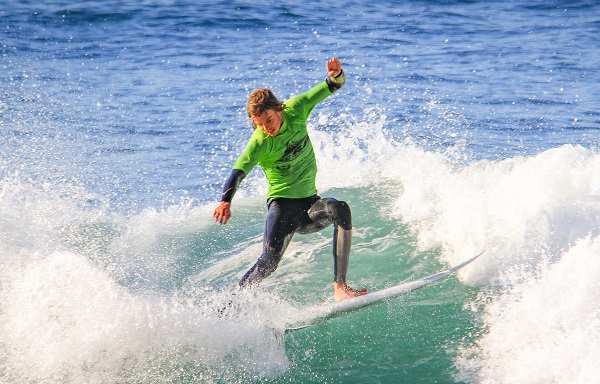