Cream of schoolgirls hockey talent on display at Collegiate

The cream of young talent in the Eastern Cape will be on display when the SPAR EC Schoolgirls Hockey Challenge provincial finals take place at Collegiate in Port Elizabeth on Saturday and Sunday.

Following registration at 2.30pm on Saturday, the five regional winners will meet in round-robin matches, culminating in the provincial decider at 11.35 on Sunday morning. 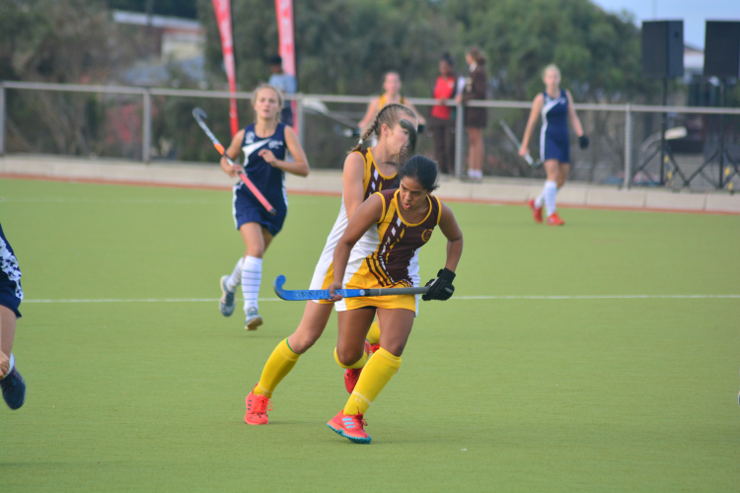 Sidne Adams (front) and Cate Cook will be in action for Woodridge in the SPAR Eastern Cape Schoolgirls Hockey Challenge provincial finals at Collegiate on Saturday and Sunday. Photo: Full Stop Communications

Having won the PE Coastal tournament with a tense victory over Collegiate, Woodridge coach Maxime Bird said they were expecting a tough competition but we were looking forward to the opportunity.

“As the teams are all regional winners it will be really strong,” she said. “But we know that there is always a good vibe at these finals and it’s a great chance for the players to reconnect with their friends from other regions.

“We understand the competition will be intense, but we are going there to play the game we love. Someone has to win and someone has to lose, so we just want to go out to play and to enjoy.”

Bird added that instead of placing emphasis on individual players, their strategy would be on an overall team effort.

“They each bring something different to the game but they all have a job to do, so it’s all about working as a team.”

The matches in the provincial finals are limited to 30 minutes, which means coaches try to adopt a specific strategy for the abbreviated period.

“Obviously with the short game time it is imperative to attack early and score goals,” said Bird.

“The strategy does depend on how the players are feeling on the day and how the opposition are performing.

“Each match is different and as important as the next, so we take each fixture as it comes and adapt accordingly.”

DSG coach Chris Hibbert said they realised the pressure would be on but were geared up to manage the process.

“We will have fun and try to get the girls to learn how to cope with a high-pressurised, result-focused environment, so that they can grow from the experience,” he said.

“We believe we have good goal-scoring ability and, in players like Torva Sharwood and Enya Kemp, we will always be asking questions of the opposition defences.

“We also have some exciting young players coming through and a number of EP U16 players in our team. Players like Nikki du Toit, Indipile Ndamase, Josie Apps and Chelsea Lennett will need to step up to the standard required this weekend in order for us to be competitive.”

He also paid tribute to SPAR and the tournament organisers for making an event of this nature possible.

“It’s a fantastic event to have in the Eastern Cape, which has grown from strength to strength,” added Hibbert.

“DSG are very excited to be attending the provincial finals for the second time in its four-year history.”

SPAR EC sponsorship and events manager Alan Stapleton said they were anticipating another high-quality tournament, which incorporated all their values.

“We are really excited about this provincial event and looking forward to the finals at the weekend,” he said.

“We expect there will be great rivalry among the teams, but with the event being split over two days, there is also a chance to strengthen the bonds of friendship and that is where the true value of sport lies.”