University of Johannesburg soccer star Amanda Mthandi says there is a massive air of excitement in the Banyana Banyana camp as they look ahead to their debut World Cup appearance.

The South African squad, who left for France last week, will play their opening game against Spain on June 8 and Mthandi said they were on a mission to prove themselves.

“This is the biggest tournament in the world in women’s soccer and to have a chance to compete on this sort of stage is a wonderful opportunity for all of us,” said the 23-year-old striker.

“We know it will be a really tough challenge, but our goal as a team is to advance to the next stage of the competition.”

Banyana have been drawn in a difficult group, which also includes China, whom they play on June 13, and Germany (June 17).

Mthandi made her debut for South Africa in last year’s African Cup of Nations tournament in Ghana. Banyana came second to book their spot in the World Cup finals.

The UJ star scored her first international goal in that tournament against Equatorial Guinea and has been focused since then on making the squad for France.

“All the hard work has paid off and I am really motivated to use this opportunity on a world stage,” she said.

“The only thing I am focused on at this stage is to continue to work hard and hopefully I will reap the benefits of that.”

As befits a striker, Mthandi said her priority when she went onto the field was to get the ball into the back of the net.

This was the same goal she set herself before the African Cup of Nations, being rewarded with the strike against Equatorial Guinea.

“It I get a chance to play that is all I will be concentrating on,” she said.

“As a team we can’t wait to get all the preparations behind us and get onto the field for the first game. This is our chance to showcase our talents to the biggest audience in the world.”
UJ coach Jabulile Baloyi said they backed Mthandi and the national team to make the country proud.

“We are very happy for her and proud of her efforts to be included with the best players in South Africa,” she said. “We want to wish her and the team all the best for the tournament.

“Her selection is an example to many players that hard work does have its rewards and she will be an inspiration to many UJ players who aspire to greater heights.” 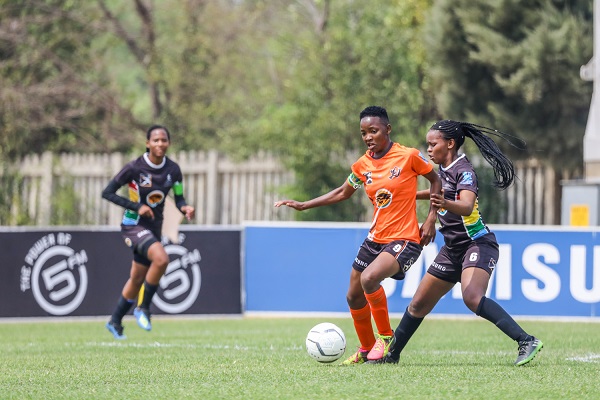