Alexander Road will be hoping to take their momentum from recent schools matches into the PE Central leg of the SPAR Eastern Cape Schoolgirls Hockey Challenge on Sunday.

The tournament will take place at Alexander Road in Port Elizabeth, with the winners qualifying for the provincial finals on July 27 and 28.

It will be a busy weekend for the competition as the East London Inland edition will also be held on Sunday, at Kingsridge in King William’s Town.

Alexander Road coach Kyle Schimper said their team had changed from the side which won the PE Central title last year, but they had settled down well.

“Scoring six unanswered goals against Victoria Park this past weekend has definitely assisted our confidence in the goal-scoring department, which is crucial in the shortened version of the game,” he said, referring to the format of 20-minute matches.

“The big tactical challenge is finding the balance between attack and defence.

“Most teams tend to want to go on all-out attack but this can sometimes have a negative effect as an unexpected breakaway or counter-attack can lead to a goal against you.”

Schimper felt they would come up against some strong challengers on Sunday.

“Collegiate will be the big test in our pool and teams like Pearson and Woodridge always have strong hockey teams.

“Framesby is another team you cannot underestimate with their impressive improvement over the last few years.”

Having won the East London Inland tournament in the three years since its inception, Kingsridge coach Mark Taljaard is expecting fierce opposition from their rivals in King.

“It is going to be tough because someone else wants to win it now and we will have a target on our backs,” he said.

“It’s not the best position to be in. We will obviously be aiming to win again, but we know it won’t be easy and we can’t take anything for granted.”

He added that teams such as Queenstown Girls’ High and Aliwal North would be serious contenders.

“But in this format any of the teams have a chance and it means you have to play with care in the pool games.

“We do try to put the pressure on from the start because an early goal puts you on the front foot, but you also have to take into account the strengths and weaknesses of your opposition.”

Taljaard said the girls enjoyed the SPAR tournament, which gave them a chance to face schools they might not normally play.

“It’s great exposure for all the girls, with good competition but all played in the right spirit.” 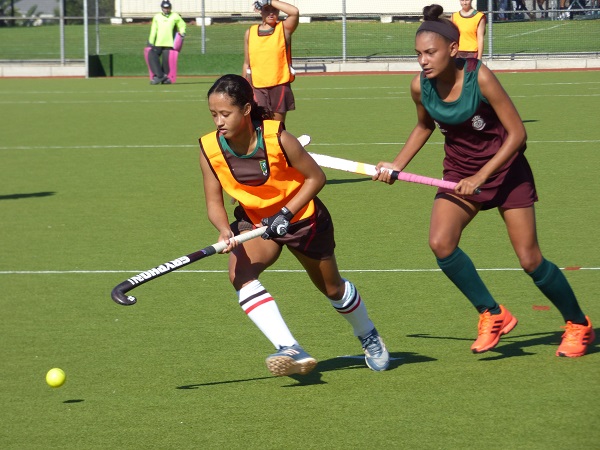 Kiara Meyer (left) will be aiming to help Alexander Road retain the title in the Port Elizabeth Central leg of the SPAR Eastern Cape Schoolgirls Hockey Challenge at Alexander Road in PE on Sunday. Photo: Supplied