University of Johannesburg student Stephen Bhasera has been honoured by his native country, Zimbabwe, for his hard work and dedication to rugby.

The Varsity Cup prop, who has been sadly sidelined for the season by an injury, has been nominated for the Zimbabwe Achievers Awards in the Sports Personality of the Year category for 2019.

“It is an initiative that honours Zimbabweans who reside outside of their home country and are doing commendable things in a variety of fields,” said Bhasera, who will graduate from UJ with a law degree (LLB) in April.

“It covers categories from business to community work to academia, sports, culture and media.

“The awards take place annually to honour Zimbabweans based in five different countries and I have been nominated for Sports Personality of the Year for South Africa 2019.”

The 23-year-old Bhasera said he was privileged to be considered for the award.

“It is a good feeling to receive the recognition, but also humbling to be named among people such as Kaitano Tembo (SuperSport United coach) and Tapiwa Mafura, who himself took the Varsity Cup by storm in 2018.”

With his home base being Kadoma in Zimbabwe, Bhasera lives in Atholl in Johannesburg, although he will be leaving later this year to study in the United Kingdom.

Having initially received offers to attend various top law schools around the world, Bhasera chose to pursue his career in UJ.

“I took that route because I wanted to exhaust my desire to play professional rugby and to play at the highest level,” he recalled after leaving school at Falcon College in Zimbabwe.

“Having the Lions [rugby franchise] on board in terms of a contractual commitment was the main motivation for deciding to take the SA route.”

He turned out for the Lions U19 team in 2015 and played for the province in the SuperSport Challenge and the Currie Cup premier division.

After being part of the Young Guns set-up at UJ, he graduated to the Varsity Cup squad this year before the injury ended his future in the competition.

“I played the first three games of the season and then suffered an injury in training that has put me out for the rest of the programme.

“Despite that my Varsity Cup experience has been largely positive – it’s a unique initiative that combines the benefits of top-level rugby with the perks of studying at an institution of higher education.

“I wouldn’t say I’ve found the transition into Varsity Cup difficult or the games to be more physical than what I’ve experienced before. However it is still an extremely high level of rugby.”

For now, though, his sporting career will be on the backburner as he turns his attention to a Masters in Law degree (LLM), starting in the UK in September. 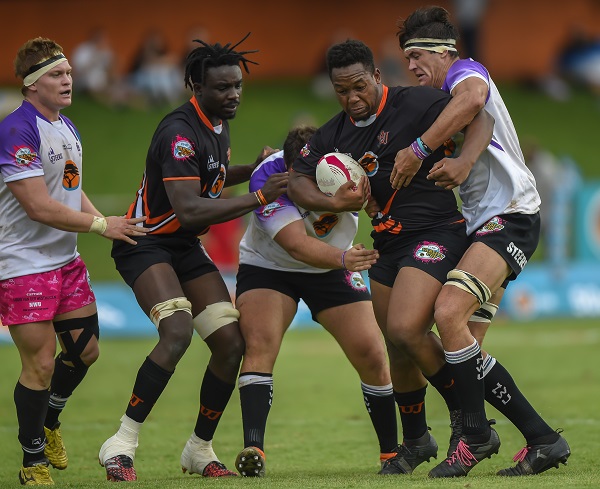 University of Johannesburg prop Stephen Bhasera is tackled during their clash against North-West University at the UJ Stadium in the Varsity Cup rugby competition earlier this year. Photo: Christiaan Kotze/SASPA