University of Johannesburg rugby captain Adriaan Bester said a concerted team effort was behind their first win in the Varsity Cup tournament this year after they defeated Wits at the UJ Stadium on Monday.

In a typically full-blooded Johannesburg derby, the UJ outfit continued their dominance over their city rivals in the competition, defeating them for the fifth time in a row.

However, the victory was not easily achieved and the result was still in the balance with five minutes to go before two late UJ tries transformed a 23-16 lead into a 39-16 result.

The second of those tries, scored by flank Bester, was worth seven points.

As is normal with a derby game, the UJ skipper said the action was fast and furious.

“It was a great team effort which brought us this win because there’s something about these games that adds a little more to the equation,” he said.

“They always seem to be a little bit faster, with more intensity and the contacts are a bit harder.

“But I must really praise the team for the work they put in and now we just have to keep working hard for the rest of the season.”

The UJ team has experienced a tough start to the season, suffering four losses in a row, including an agonising 27-26 defeat at the hands of Central University of Technology.

Bester said the win over their Wits rivals “was massive for the club”.

“We are a fairly young side and are building to get back to the top,” he said.

“But this is a tough competition where there are no excuses and we’ll just keeping working hard.

“After this win we will go back to the drawing board for next week, focus on our processes and prepare for the next task ahead of us.”

It will be one of their toughest challenges of the season as they now face the high-riding Maties in Stellenbosch on Monday, the only unbeaten team in the competition.

UJ No 9 Jack Hart, who controlled much of the play from the base of the scrum, said their victory was due to fine play by the forwards.

“I just want to say thank you to the pack because we were going forward most of the time and that is all a scrumhalf wants,” he said after being named the Player that Rocks.

“We worked hard during the week and we knew we had to be patient in their 22-metre area and just build on the phases.

“In that respect the forwards did a brilliant job and most of the credit must go to them for this win.” 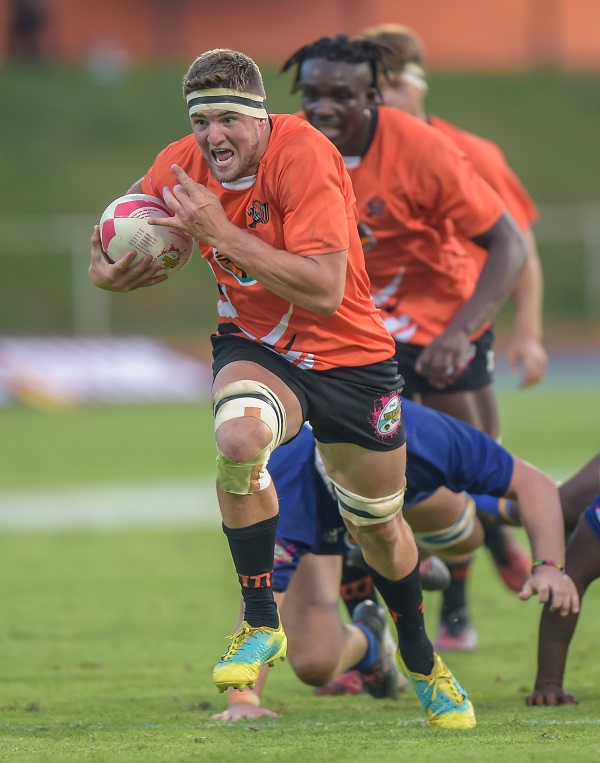 University of Johannesburg captain Adriaan Bester bursts through on his way to scoring a try in their Varsity Cup rugby match against Wits at the UJ Stadium in Johannesburg on Monday. UJ won 39-16. Photo: Christiaan Kotze/SASPA