Four years ago, Palesa Manaleng thought any chance of a career in sport was over when she suffered a cycling accident that left her paralysed from the waist down.

Today the University of Johannesburg public relations student is the South African handcycling champion in the H3 category and planning a future which includes representing her country at a range of international para competitions.

The 31-year-old Manaleng won the SA title at the national road championships in Pretoria this month and said she wanted to build on that achievement.

“Looking ahead, I plan to represent South Africa at all major competitions, World Cups or world championships,” she said. “You name it, I plan to be there and to break records.”

Manaleng, who is also a wheelchair track athlete, grew up in Polokwane before moving to Johannesburg, where she stayed in Ackerville. She has since moved to Westdene.

She described how she went through a “roller-coaster of emotions” when her accident happened, aged 27.

After her bicycle brakes failed going downhill, she crashed into the palisade fence around the UJ rugby stadium and dislocated her spine, broke two ribs, punctured a lung, fractured a shoulder and also sustained head injuries.

“I was angry that it happened to me and I was sad that I may never play sport again,” she said.

“But I was also relieved that I had a second chance at life and, in the end, I came to the conclusion to live my life to the fullest and not to miss any opportunities.”

Manaleng did doubt the possibility of doing sport again, however.

“I thought it was the end of my sporting career, mainly because I had never seen a differently abled person, besides Oscar Pistorius, compete in sports.

“And Oscar did not use a wheelchair, so I was sure that my sporting days were over.”

But while doing rehabilitation at a rehab centre she saw videos of wheelchair users who took part in sport and realised it was still possible for her to compete.

“Once I was discharged from hospital I e-mailed possible sports clubs looking for a team to join,” recalled Manaleng.

“I wrote to potential sponsors to help me purchase equipment.

“And while doing that I would wake up every morning at 6am and train up and down my street in my everyday wheelchair.

“Sometimes I would fall because I was new to this disability thing and motorists passing by would stop and help me back into my wheelchair as they headed to work.”

Eventually she mastered the art of paracycling and said the experience of doing sport again had been a revelation.

“It has given me a freedom that I thought I had lost when I lost my ability to walk. It is like learning to fly.”

Manaleng does her cycling at Muldersdrift under coach Boetie Lourens and trains at the UJ gym with trainer Dennis Dlomo.

“My training is designed on a monthly basis depending on my work schedule. However, I train six times a week without fail. Some days I train once a day, others twice.”

She paid tribute to a host of parties who helped her regain her sporting pride, including the Westdene community and UJ.

“There is an entire team of people who have helped since the day of my accident, among them friends, family, my coaches and my lecturers. And at times there have been total strangers.

“I have been so blessed to have people in my corner at all times.” 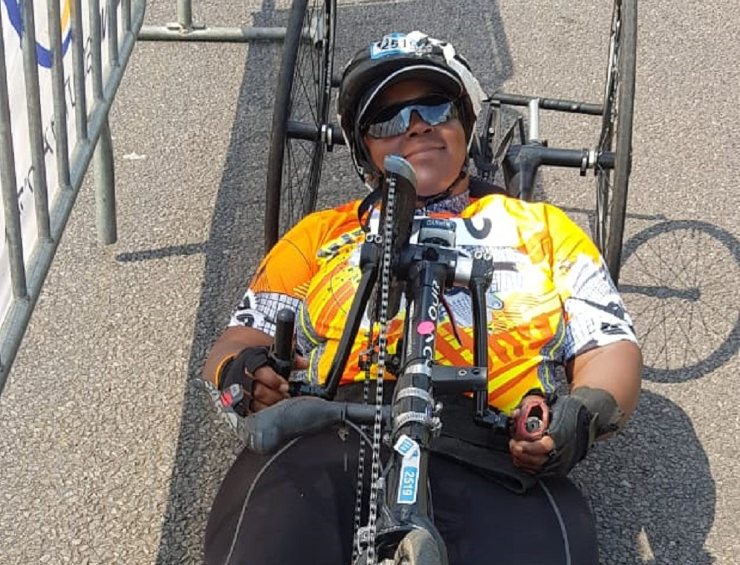