University of Johannesburg sports scientist Minky Tshabalala believes she has the best of both worlds, combining a passion for sport with her chosen career.

The 29-year-old, who lives in Sunninghill in Johannesburg, is the sports science unit manager at UJ Sport, a unit which provides services to the varsity’s seven high performance and recreational sport codes.

Last year she achieved one of her goals of working at a national level when she was named in the management team for the South African U17 girls football team which competed in the World Cup in Uruguay.

“I am sure that for any sport personnel to serve your country is one of the biggest honours,” said Tshabalala. “Working in this field it has always been my ambition to one day work with a national team.

“When I got the call-up letter I was in disbelief and happy that I would finally be working with the U17 national team at the World Cup. It only hit me once we were flying over to Uruguay that this was happening.”

The tournament took place from November 13 to December 1, but South Africa did not make the top eight play-offs.

It was a major learning curve for the squad, said Tshabalala.

“In particular, I learnt that preparation is always key and you can never stay in your comfort zone. You have to go out and learn.”

After growing up in Bendor in Polokwane, Tshabalala studied sports science at the University of Pretoria and did her practical experience at the varsity’s High Performance Centre.

She said her passion for sport drew her to the profession.

“I got into sports science because I loved sports and did everything I could, eventually playing at the national U19 girls’ cricket week.

“However, due to injury I had to shift my focus to studying and because I still wanted to be involved in sport, sports science gave me the best of both worlds from a sporting and an academic point of view.”

She said her job at UJ involved overseeing a number of projects.

“I need to identify and appoint qualified and experienced staff within the sports science environment,” said Tshabalala. “I also develop and implement a long-term development plan for all staff.

In terms of the U17 soccer team, she said her main roles included monitoring the strength and conditioning of the players to ensure they were operating at their optimum level.

“Also I closely monitor their preparation before and recovery after a match. This is to make sure I am constantly looking at ways of improving their performance as well as their general health.” 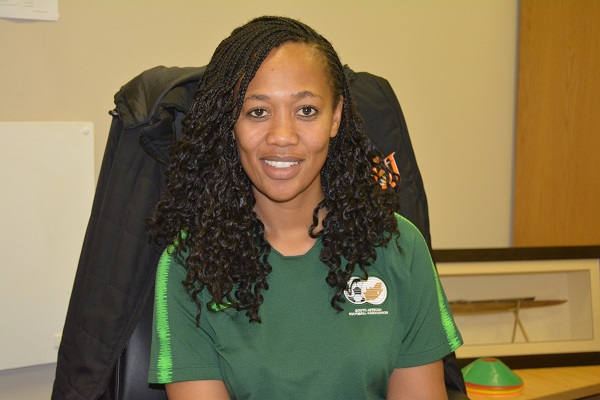 University of Johannesburg sports scientist Minky Tshabalala achieved one of her goals when she was appointed to the management team for the South African U17 girls’ soccer team which competed in the last year’s World Cup in Uruguay. Picture: Supplied