Animals are integral to any wildlife estate and residents should be versed in the ABC of co-existing with them.

That is the belief of Wallie Stroebel, a consultant appointed to oversee the wildlife population at Port Elizabeth’s Sardinia Bay Golf & Wildlife Estate.

He says it is inevitable that animals such as kudu and eland will end up grazing in residents’ gardens and that they must understand that it is natural.

“After all, we are the ones living in their environment,” he said, describing such estates as “transformed environments”.

“It has been manipulated for human consumption, but it is a wildlife estate after all.”

Stroebel says although direct interaction between residents and animals should be discouraged, the latter roam free and therefore occasional contact cannot be avoided.

“And, because the wildlife is fenced in, residents have some responsibility in this regard.”

This especially applies to the feeding of animals, he warns.

“The animals are habituated and not tamed. That means they have been conditioned to live close to humans, but they always need to retain a certain amount of personal space.”

He says touching them or cornering them or getting between a mother and her calf or a frustrated bull should be avoided because “they might just react”.

“That reaction is natural. An eland, for instance, might just swipe you aside with its head or run over you if it gets closed off.”

The animal is not being aggressive – its reactions are a natural response to people invading their personal space.

Stroebel says homeowners must contact the relevant HOA when they see something unsettling pertaining to the wildlife.

“Let the professionals handle the situation.”

He advised that dogs should be kept on leashes to avoid conflict situations while children, who may be naturally drawn to wildlife, should be taught to keep their distance.

“Smaller species such as young springboks have horns facing forward, which can be at the same height as a child’s neck or eyes. When a springbok or duiker react, they normally lunge forward with their heads.

“People must understand that they are still wildlife. However, I can assure them that 99.9 per cent of the time animals will move away before causing any harm.”

Stroebel says it is “soothing” to watch the animals interact with one another.

“It makes one remember that you are part of a bigger picture. We’re all connected in some way.

“We’re dependant on nature and nature is dependent on us. People removed from animals don’t see that.

“It’s different when you see a birth and watch the animal grow and become part of a herd. It’s a wonderful privilege and something you can show and teach your children.” 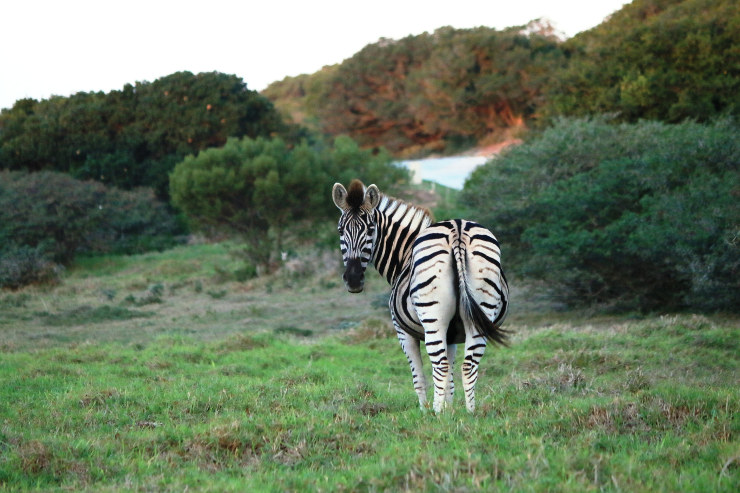 The animals on the Sardinia Bay Golf & Wildlife Estate form an integral part of the complex and it is important for the residents to know how to co-exist with them. Photo: Full Stop Communications