The Sardinia Bay Golf & Wildlife Estate is showing its strong “green” credentials by recycling treated sewage water and using it for irrigation.

Dave Russell of Clear Edge Projects says they have constructed a site-specific sewage treatment plant on the estate that is linked to the irrigation system.

He says each household has a septic tank from which sewage water and grey water is piped to a central pump station on the estate.

The water is then transferred to the treatment plant, where it is purified.

“That water then goes directly to irrigation,” he said, adding that a series of ponds were designed for storage of excess water.

Plastic liners were used in the construction to prevent any contamination from groundwater and in so doing, a wetland was created.

“Once we installed the ponds it was reported that ducks were seen in the area for the first time,” Russell said.

“Then suddenly we had a whole host of birdlife coming in.”

The water in the ponds was safe for animals to drink, Russell added.

“It meets the Department of Water Affairs’ standards to be discharged to the environment.”

He praised civil engineer Jaco Spies, who was responsible for the work in preventing any potential pollution reaching the water system.

Russell said the estate’s purification plant was “possibly” the first privately owned sewage treatment facility in Port Elizabeth and that the water was primarily used to irrigate the golf course fairways and greens.

“If you look at the cost of water this system more than pays for itself,” he said.

“The water has a nice balance between nitrate and phosphate, which makes it good for irrigation.

“Instead of throwing tons of fertiliser onto the greens, the estate can rather use the treated sewage water.”

The ponds, Russell explained, not only served as a habitat for birds and wildlife on the estate, but also as storage for the treated water.

“It’s stored for irrigation and obviously you won’t irrigate when it rains, so then that’s when the ponds become even more useful,” he said, adding that before the ponds were built the site was merely a drainage area.

He said they were particularly cautious not to allow any linking of the treated water and the potable water supplied from the municipal grid, which was piped directly to the homes and clubhouse on the estate.

The treatment plant was designed to cater for the estate at “full capacity”, Russell added.

“We’re only currently running at about 20 to 25 per cent of the capacity.

“That bodes well for future development of the estate, because the more houses that get built the more water gets produced for irrigation purposes.

“We’ve already got another plant in phase two, but it’s on standby at the moment waiting for more houses to come online.” 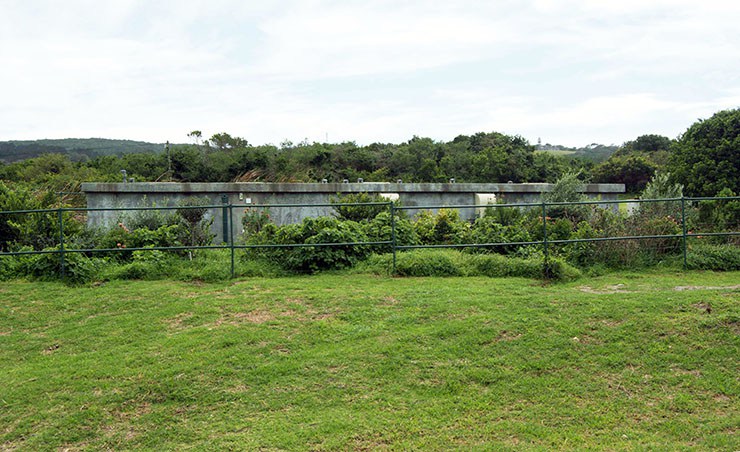 A site-specific sewage treatment plant has been constructed on the Sardinia Bay Golf & Wildlife Estate that is linked to the irrigation system. Photo: Full Stop Communications