Habata Agri have been able to lend a helping hand to struggling farmers in the Klawer area near Vredendal, thanks to the recent acquisition of a fruit farm near Robertson, on which some lucerne is grown.

Jan Rabie, Habata’s Western Cape production manager, said they were pleased to be able to donate 14 tonnes of lucerne to assist those in need.

Even though the demand for and price of lucerne were high as a result of the drought, Rabie felt strongly that they should donate their crop to the hard-hit farmers rather than sell it.

On a day when emotions ran high as a number of farmers received assistance, Rabie said they understood the challenges many were facing in the drought-stricken region.

Farmers in the Northern and Western Cape have been battling as a result of the severe drought, which has crippled their ability to produce anything near their normal output.

Roewald van Huffel, manager of the Goreeshoogte farm, and labourers happily assisted by loading the truck on one of Robertson’s hottest days this summer, with temperatures reaching over 40 degrees.

“Our hearts go out to our fellow farmers, irrespective of race,” said Rabie. “We all have experienced financial difficulties and tough times. We know how devastating it is.

“With that in mind I contacted Burre Burger to see how we could assist.”

Burger is a farmer from Vredendal who has become heavily involved in creating awareness of the severe drought and of the need to help farmers in the stricken areas.

“The lucerne donation was an ideal opportunity to help others,” said Rabie.

“We joined forces with Stemmet Transport and the Round Table at Robertson. They sponsored the transport, so we were able to provide some much-needed fodder for sheep.”

Many farmers were going through their second or third year without decent rains and were facing plenty of challenges, he added.

“We just felt this was an opportunity to support the farmers who really needed assistance.”

Although the region had received a little rain recently, Rabie said everyone was facing a challenge.

“It was a very emotional day when the lucerne arrived there. The donation provided a sign of hope during a time of absolute desperation.

“The owner of the truck personally delivered the load and to see the recipients’ appreciation was a moving experience.”

At the same time, bags of pet food were also donated to farmers and workers who were unable to afford that either.

It may seem a small donation in these difficult times, but every little bit helped, said Rabie.

“This just relieves the pressure and might save the lives of their animals.” 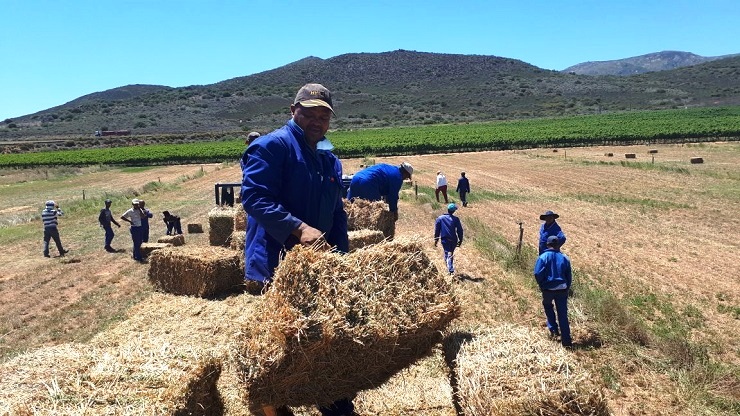