A transplant operation involving 25-year-old lemon trees has proved a major success for Habata Agri’s production of the Eureka brand this year.

Planted in 1993, the trees were moved to another area of the Addo farming operation in 2014 as the growth had become too dense on the original site.

Habata production director Gary Webb said they had been confident that the transplanted trees would flourish, but were pleasantly surprised at how well they had done.

“We have had around 99% success and that has provided us with 100 tonnes per hectare,” he said.

“In comparison, if you had planted young trees in 2014, they would be four years old [in October] and you would possibly get 40 tonnes per hectare.”

Initially, Webb said, the trees had been planted in six-metre wide rows, with the trees two metres apart, which eventually became too dense for effective growth.

“This was not allowing enough sunshine through, so in 2014 it was either plant young trees and cut these up for mulch. But at that stage the nurseries did not have enough young trees for us to plant, so we took the option of cutting the existing trees back and use them for a replanting programme.

“There are some costs involved but when you realise that we will now pick an extra 3 000 bins of the fruit, it does pay its way in the end.”

Webb said the modus operandi involved trimming the trees so the transplanted product was basically the stem with a few branches, without any leaves.

“We took them out with a tree spade and replanted by merely placing the trees on the surface of the new area and piling up ground around the base.

“They are not planted into the ground, but rather have a mound of ground created around the base so water from irrigation runs off, rather than settling at the stem.”

He added that the transplanted lemon trees covered an area of 29 hectares and that the fruit had come through extremely well.

“The fruit size is perfect and in this type of sandy loam soil you can carry on for at least another 20 years.”

Habata are now in their main season for harvesting lemons, although the fruit is picked for much of the year.

Webb said they started the process in March and April, but the “big pick is from June to August”.

The transplanted trees occupy a site which was previously used for spanspek but Webb said it was necessary to rotate the melon crop after two or three years. 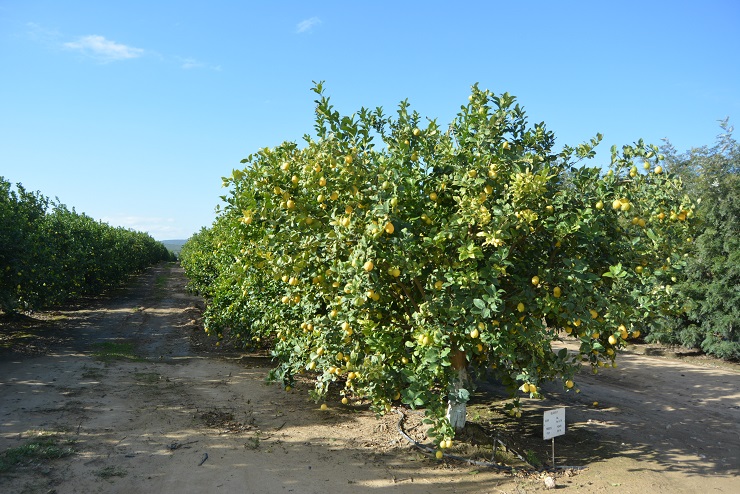